Hardkernel launched a new single-board computer in July that basically takes the guts of a Raspberry Pi mini PC and sticks them in an even smaller package. But just a month after launching the ODROID-W, Hardkernel has announced that once it’s finished selling the units it has in stock the project is kaput. You won’t ever be able to order a new ODROID-W.

So while you can still pick one up for about $30, the company doesn’t recommend using an ODROID-W for “new designs.” 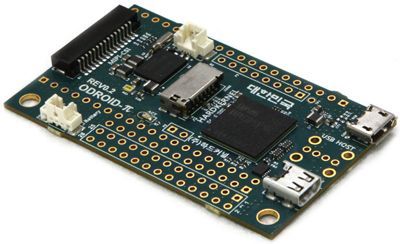 In other words, you can continue to use the ODROID-W as a tiny, Rapsberry Pi-compatible PC that can run Linux-based software. But if you were planning to use it to build your own tablet, laptop, robot, or home automation system that could be easily reproduced… you might want to try finding a different single-board computer.

According to Hardkernel, the company pulled the plug on the project because Broadcomm stopped supplying the BCM2835 processor needed to make the ODROID-W.

The project had drawn criticism from some members of the Raspberry Pi developer and user community who felt that Hardkernel was taking advantage of all the work that had been put into developing the Raspberry Pi platform.

Hardkernel has been offering its own small, low-power development boards with ARM-based processors for a few years. The ODROID-W was one of the smallest and cheapest to date… and one of the most interesting because it was designed to be able to run any software and use many peripherals designed for the popular Raspberry Pi. But it’s a more compact device that doesn’t even have an Ethernet jack.

The company says it’s working on ideas for its next product, but it could take up to half a year before we’ll see that new device.