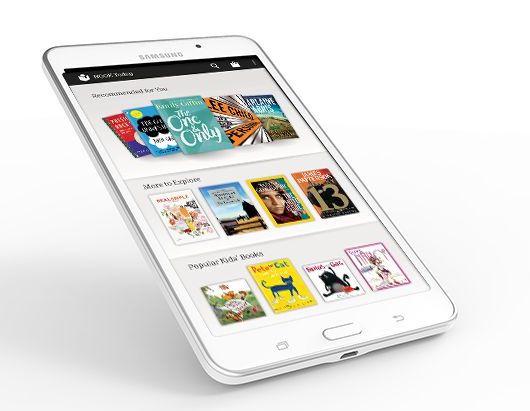 What makes it different from a standard Android tablet is the NOOK software. It’s Android, but it features tight integration with the NOOK Shop or eBooks, magazines, newspapers, TV shows, movies, and apps. The tablet does have access to the Google Play Store as well, so you can install third-party apps that might not be in the NOOK Shop … including the Amazon Kindle app or other competing eBook apps.

B&N says the Galaxy Tab 4 NOOK also comes with up to $200 in free content, including free eBooks, videos, and apps — but you’re limited to content from a small list in each category. The company is also counting 14-day trial subscriptions for a handful of magazines in that $200 figure.

In some ways the new Samsung Galaxy Tab 4 NOOK from B&N’s now-discontinued NOOK HD tablet. That 7 inch tablet had a higher-resolution 1440 x 900 pixel display and up to 10.5 hours of battery life. But it also had an older processors and probably wound up requiring more of B&N’s resources to develop than the new Galaxy Tab 4 NOOK which is basically a third-party tablet with the NOOK name and software slapped on.

Whether it will sell any better than the NOOK HD remains to be seen.

B&N isn’t selling the older NOOK HD or 9 inch NOOK HD Plus anymore, but you can still find new or refurbished models from a number of other stores. Groupon is offering a refurbished NOOK HD 7″ tablet for just $90 at the moment. That’s just half the price of the new Samsung Galaxy Tab 4 NOOK.

I’m also amused to see that you can buy a new NOOK HD from B&N competitor Amazon for $120.

Update: KT got a chance to spend some time with the Galaxy Tab 4 NOOK in person. Check out her hands-on impressions.