The tablets are referred to as the Asus K01E and Asus K01B, respectively, but those model numbers don’t tell the full story. 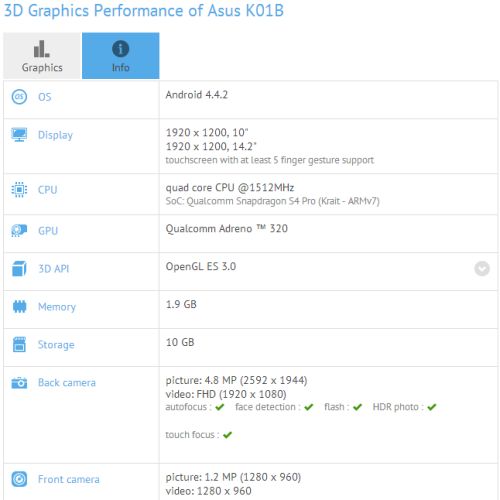 It’s likely that the larger tablet will be branded as an Asus Transformer Pad and work with an optional keyboard dock that lets you treat the tablet like a notebook. It’s hard to imagine why Asus would launch a 14.2 inch tablet unless it’s designed to work with a keyboard… although I suppose it is possible, in which case the tablet will probably be part of the company’s MeMO Pad lineup.

The 9.4 inch tablet could be part of either product family. The GFXBench data doesn’t provide any clues.

Both tablets feature Android 4.4 KitKat software and 1.5 GHz Qualcomm Snapdragon S4 Pro quad-core processors with Adreno 320 graphics, which is similar to the chip in the 2013 Google Nexus 7 tablet designed by Asus. Qualcomm has faster chips, but the S4 Pro is no slouch and the decision to use an older chip is probably an indication that these tablets will be relatively inexpensive.

Another indication is that the 9.4 inch model features just 1GB of RAM, 16GB of storage, and a 1280 x 800 pixel display. It has a 2MP rear camera and 0.3MP front camera. Like the 3 tablets Asus launched this summer, this model appears to lack an ambient light sensor. 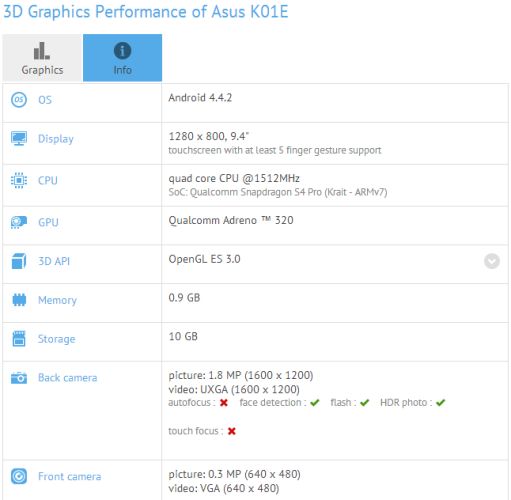 The 14.2 inch tablet has somewhat better specs including a 1920 x 1200 pixel display, 2GB of RAM, 16GB of storage, a 5MP rear camera, and 1.2MP front-facing camera. It does have an ambient light sensor for adjusting the display brightness automatically.

Asus hasn’t yet officially announced these products and just because they’ve shown up in benchmark results doesn’t mean they’ll ever see the light of day. But the IFA trade show starts in just a few weeks, so don’t be surprised if Asus uses the opportunity to unveil a few new Android tablets.