Looking for a portable projector that lets you stream videos, PowerPoint presentations, or other content onto a wall… without connecting to a computer? TouchPico is a tiny projector that runs Google Android, allowing you to project just about anything that you’d see on your phone onto a screen or wall.

It can beam an 80 inch image onto a wall — and you can use a special pen to interact with that image as if you were using a touchscreen. In other words, the TouchPico basically turns your wall into an 80 inch touchscreen Android display.

There are a few caveats: the biggest is that TouchPico isn’t yet available for purchase. The developers are running an Indiegogo campaign to bring the device to market by October. The full retail price will eventually be $499, but if you back the Indiegogo campaign you might be able to save a few hundrd bucks. 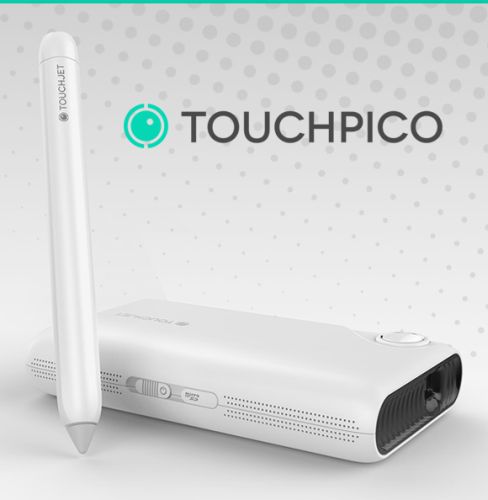 Another caveat? The TouchPico only has a resolution of 854 x 480 pixels and only has a 150 lumen lamp: so you’ll need to be in a relatively dim room to effectively use the device.

Using an infrared pen to interact with Android on a big screen can also be a little tricky, since you want to make sure your hand or arm don’t get in the way. And if you plan to use the device in a location where you can’t keep it plugged into a wall jack you’ll only get about 45 minutes of battery life. That might be good enough to give a work presentation, but it’s not enough to stream a movie from Netflix.

The TouchPico features USB, HDMI, and AV ports, a microSD card reader, and 802.11n WiFi. In addition to the digital pen, you can use a built-in optical touch sensor to control the device.

You can also pair it with a Mac, Windows PC, or a smartphone over WiFi to control the projector with a mouse or touchpad or project content from your other devices.