Intel’s Sharks Cove is a single-board computer aimed at Windows and Android developers. It has an Intel Atom Z3735G processor, 1GB of RAM, 16GB of storage, HDMI output, and a range of input and output options including USB, GPIO, UART, and other pins.

Essentially it’s like a Raspberry Pi or Arduino for folks that want to develop and test software with Intel’s chips rather than ARM-based processors.

It’s also more than 8 times the price of Raspberry Pi. Sharks Cove boards are now available for pre-order for $299. 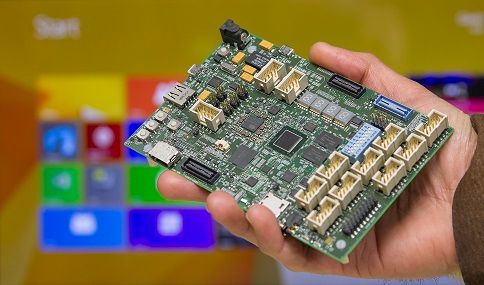 Intel and Microsoft unveiled the Sharks Cove platform in April, but didn’t reveal the price tag at the time.

$299 isn’t actually a bad price for a developer-centric piece of hardware that will probably be produced in limited quantities. But at a time when you can buy a fully functional Windows tablet for $199 or an ARM-based developer board at a small fraction of the price, the Sharks Cove board does start to seem a bit expensive. The price is probably a sign that Intel doesn’t expect its product to appeal to amateurs and hobbyists the way that the Raspberry Pi and some other single board computers have.

via MSDN and Ars Technica