Like the look of the Samsung Galaxy S5, but not sure you want a phone with a big 5.1 inch display? Samsung’s got a new, slightly smaller version: the Galaxy S5 mini.

But it’s not just the size that’s been reduced… it’s also the specs. 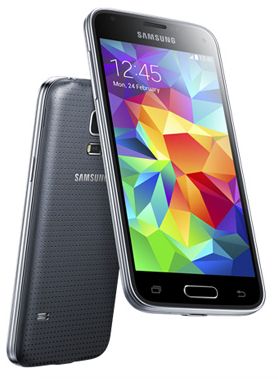 In other words it’s smaller, has a slower processor, less memory, a lower-resolution rear camera, and a smaller battery than the bigger model. Samsung’s smaller S5 also lacks 802.11ac WiFi.

The Galaxy S5 Mini does pick up a few tricks from its big brother. It has an Ip67 water and dust resistant case, a fingerprint sensor, heart rate sensor, and Android 4.4 KitKat software. It supports HSPA and 4G LTE networks and has a microSd card slot.

It feels strange to call a phone with a 4.5 inch screen “mini.” There was a time when 4 inch smartphones were considered enormous. But it’s nice to see Samsung offering its phones in a variety of sizes… it’d be even nicer if its smaller phones had more of the high-end features reserved for its flagship devices.

The Galaxy S5 mini will launch in Russia in early July before expanding to other markets.