The Paranoid Android team has a reputation for bringing slick new features to their custom builds of Google Android. With the move from Android 4.3 to Android 4.4 the developers started from scratch by scrapping all of their old work and coming up with new tricks.

So the first few builds of Paranoid Android 4.4 looked a lot like the stock version of Google Android. But over the last few months new features that change the way notifications, multitasking, and other features work have found their way into Paranoid Android.

Now the team is borrowing a feature from the upcoming Android L release and bringing it to Android 4.4 KitKat. 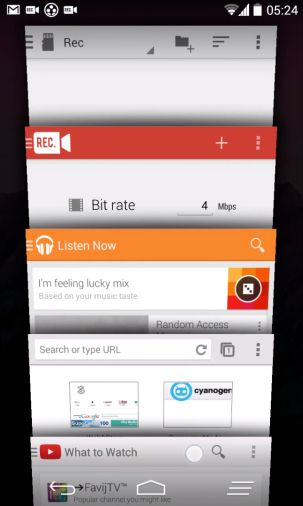 Paranoid Andorid 4.5 Alpha 1 is now available for download, and while it’s still based on Android 4.4 it includes the new recents view from Google’s Android L developer preview.

That means your recent apps, web pages, and other content now show up as cards that you can flip through instead of simple thumbnail icons.

This lets you see more recent items at once. It also lets you see individual web pages from browser tabs instead of a single picture showing a web browser. You can still remove items from the list by swiping to the side, or you can expand the cards swiping down.

Eventually this is a feature that’ll find its way to any device running Android L or later. But folks who install the Paranoid Android custom ROM on their phone can try it now. Keep in mind, this is an Alpha release, which means it might not be entirely stable.