The NVIDIA Shield Tablet is an 8 inch Android tablet with a full HD display, an NVIDIA Tegra K1 processor, and an emphasis on gaming.

We’ve heard a lot about the tablet over the past few weeks, even though NVIDIA hadn’t officially introduced the device yet. Now a series of leaked slides tell us just about everything there is to know.

The Shield Tablet should be available for purchase starting July 29th and it’ll sell for $299 and up. 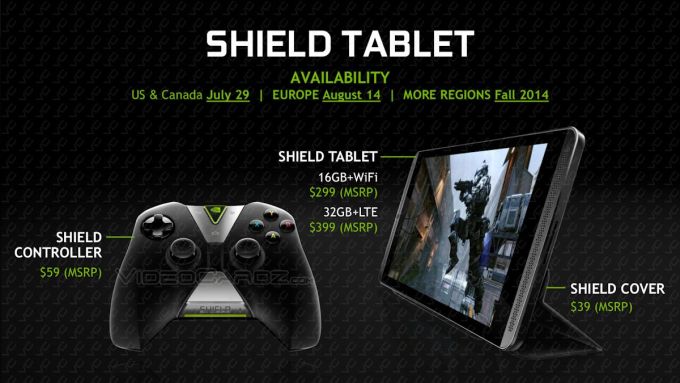 Want a wireless game controller? That’ll be another $59, but what you get is a console-style controller that not only lets you play games on the tablet… if you plug the tablet into your TV with an HDMI cable it basically turns the device into a game console for your living room.

Don’t relish the idea of playing Android games designed for small screens on your TV? No problem. Part of what makes the Shield special is its support for NVIDIA’s GameStream technology. If you have a PC in another room (or even another house) with a recent NVIDIA graphics card in it you can stream some PC games over the internet to your Shield tablet… and even to your TV.

The tablet also supports NVIDIA’s DirectStylus 2 system for pressure-sensitive input with a stylus and 4K video playback. They feature dual-band 802.11n WiFi, Bluetooth 4.0, and feature 5MP cameras on the front and back. Both cameras support HDR photos, but only the rear camera has auto-focus.

The Shield Tablet also has a microSD card slot for up to 128GB of removable storage and stereo, front-facing speakers.

If you opt for the LTE model you’ll get support for AT&T and T-Mobile networks in the US and the tablet also supports HSPA+, GSM, and EDGE networks.

via Droid Life and Overclock3d