NVIDIA’s expected to launch an Android tablet with an emphasis on gaming this year. Now @evleaks has posted what may be the first good picture showing us what the NVIDIA Shield tablet will look like.

Update: A French retailer has given us another look at what could be the upcoming Shield Tablet. 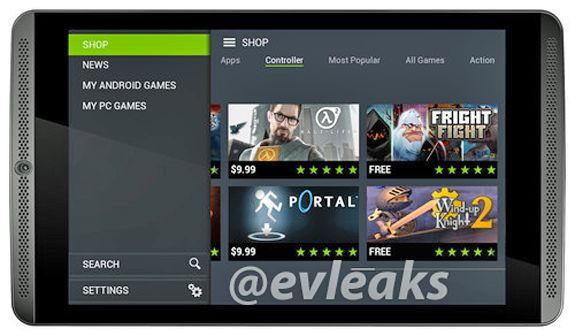 You may also notice an option that says “My PC Games.” While the Shield Tablet will probably have an NVIDIA Tegra K1 chip with 192-core graphics and support for some of the best-looking Android games, one of the key selling points for the tablet will be support for streaming PC games over the internet.

If you’ve got a PC with a supported NVIDIA graphics card you’ll be able to use GameStream technology to stream the game over your home network or over the internet so that you can see and control the game on your handheld tablet while your PC is actually doing most of the heavy lifting. This makes it possible to play PC games that wouldn’t otherwise be available on an Android tablet.

NVIDIA will also probably offer accessories for the tablet including a wireless game controller. This will let you connect the tablet to your TV with an HDMI cable and use it to play PC games on your TV without carrying your desktop computer into the living room.

The company already offers a handheld game console with a built-in controller and a 5 inch screen called the NVIDIA Shield. But a tablet could appeal to a wider audience than the original Shield since a tablet is a multi-purpose device that’s not just designed for gaming.

13 replies on “This could be the NVIDIA Shield Tablet (leaks)”