Want to run Android apps on your TV but don’t want to wait for the official Android TV launch? No problem — Chinese companies have been offering pocket-sized sticks with HDMI ports and ARM processors that lets you run Android on a TV for the past few years.

But for just about as long as these Android sticks have been available, folks have been figuring out how to run Ubuntu or other desktop Linux distributions on them — turning these little devices into cheap, low-power desktop computers.

Some of the most popular models feature Rockchip RK3188 quad-core processor and price tags ranging from about $50 to $100. Up until now it’s taken a bit of elbow grease to load Linux on these systems — but Ian Morrison has just made things a lot simpler. 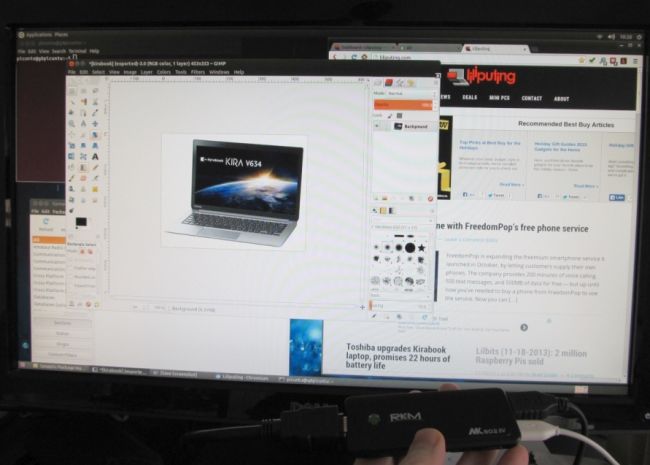 If you have a supported device all you have to do is download a disk image, plug a microSD card into your Windows PC and use the Win32 Disk Imager app to load the software onto the SD card.

Once that’s done, stick the microSD card into your ARM mini PC, turn on the power, and you should boot into Ubuntu 12.04 LTS Linux. Since the operating system is loading from the removable disk you won’t be writing anything to internal storage — that means you can power down the device, take out the microSD card and the next time you turn the machine on it’ll boot into Android again.

If you’re using a Linux desktop to prepare the card, you can use dd to load the disk image instead of Win32 Disk Imager.

You can find more details in Morrison’s post on Google+.

While there are a handful of ARM-based mini PCs that come with Linux pre-installed, it’s generally a lot cheaper to buy an Android model and load Linux yourself. Amazon has a number of RK3188-based models

for prices as low as $52, although not all will work with Morrison’s disk images.