Amazon’s Fire Phone may have just begun shipping, but there’s a good chance the company is already getting ready to launch its next device. It’s been nearly a year since the Amazon Kindle Fire HDX line of tablets hit the streets, and if leaked benchmarks are anything to go by, it looks like a next-generation Fire HDX 8.9 tablet with a faster processor is on the way. 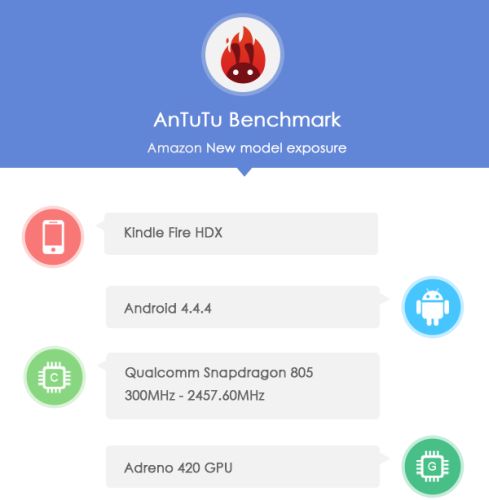 The folks who make the AnTuTu benchmark utility for Android devices spotted a device profile in their results for an Amazon Fire HDX tablet with a Qualcomm Snapdragon 805 processor.

Amazon’s current tablets are powered by a Snapdragon 800 CPU. Qualcomm’s newer chip runs at a higher clock speed, has an updated processor architecture, has more memory bandwidth, and offers more powerful graphics, among other things.

Like the current Kindle Fire HDX 8.9, then new model seems to have a 2560 x 1600 pixel display and 2GB of RAM. But while the latest software for Amazon’s tablets is a heavily modified version of Google Android 4.2 Jelly Bean, the new model seems to be running Android 4.4 KitKat.

It’s too early to say if this means a faster Kindle Fire HDX with an updated version of the Fire OS operating system is on the way… we could just be seeing the results of internal testing on a prototype that will never see the light of day… or the results of some prankster messing with their device profile before running some benchmarks. But Amazon has released a new Kindle Fire tablet every year since 2011, so it seems entirely plausible that a new model is coming this fall.