The Wireless Power Consortium is adding support for resonant charging to its wireless charging technology. That means that your phone, tablet, or other device doesn’t actually have to touch a charger that uses Qi v.1.2 technology.

This opens the doors for things like desks with chargers embedded into the tabletop instead of resting on top of it or you can stick a charger on your desk, cover it with a notepad, some sticky notes, a coaster, or whatever… and still charge your device just by placing it on top. 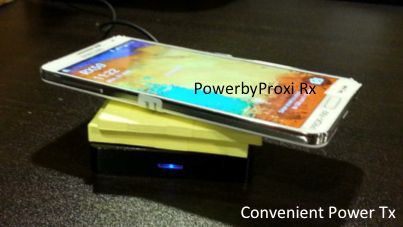 Resonant charging could also make it easier to charge multiple devices simultaneously while using a single charger since your devices don’t have to rest directly on the charging surface.

If resonant charging sounds familiar, that’s because that’s the wireless charging technology championed by a rival group, the Alliance for Wireless Power and its Rezence standard. Up until now Qi chargers used inductive charging instead, which required you to actually rest your device directly on a charger.

The Wireless Power Consortium says there are already prototype chargers that can charge a device over a distance of 45 millimeters, or almost 1.8 inches.

If you already have a device that uses Qi v.1.1 technology you won’t necessarily need to upgrade the hardware. But the range will be a bit more limited with top distances of 30mm or about 1.2 inches.

The new standard is also backward compatible, which means you can use a Qi v1.1 receiver with a v.1.2 transmitter, or vice versa.

Wonder just how much power can be transmitted wirelessly? According to the press release a Qi system can supply up to 2000 watts of electricity for kitchen appliances. Of course if you’ve got a device that uses that much energy, odds are it’s a big device like a refrigerator or electric oven and you’re probably better off just plugging it in because you probably don’t move it very often and a wired connection is generally more energy-efficient than a wireless one.