Trying to decide whether to pick up a Chromebook or a Windows laptop? If you’re leaning toward a Chromebook because it’s cheaper… well, it might not be. There are already plenty of cheap Windows laptops, and Microsoft is promising that we’ll see even more cheap models from partners including Acer, HP, and Toshiba in time for the holiday season.

The Verge reports that Microsoft is taking on Chromebooks directly, suggesting that Windows devices can offer more value for a similar price — although fans of Chrome OS might argue that sometimes less is more. 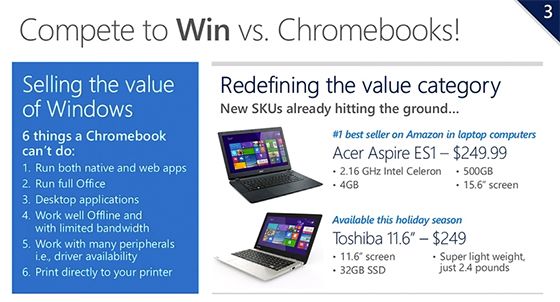 HP, meanwhile, is said to be working on 7 and 8 inch “Stream” devices which could sell for just $99. I suspect those will be tablets rather than notebooks.

Update: Yup, HP’s got a “Stream laptop” in the works which will sell for $199 and a 7 inch Windows tablet that will be part of the same family and sell for $99.

As Microsoft points out, there are some things you can do on a Windows machine that you cannot on a Chromebook. You can run the full version of Microsoft Office, be sure that most printers and other peripherals will support your device, and run native Windows apps. You can also install the Chrome web browser and do nearly anything you would be able to do on a Chromebook.

But some of Microsoft’s other key selling points aren’t entirely true. You can use some Chrome web apps even without an internet connection, use Google Cloud Print to send print jobs to supported devices, Google Drive (or Microsoft Office Web Apps) for some document editing, or even load Ubuntu, Debian, or another Linux distribution if you want desktop apps.

Meanwhile, Chromebooks tend to boot quickly, offer a secure platform since apps run in a sandboxed environment, and the peace of mind that comes with knowing that almost all of your data is backed up in the cloud so you can pick up where you left off just by logging into another machine.

I’m not saying Chrome OS is better than Windows. But it’s a lot less complicated and I suspect Chromebooks haven’t become one of the fastest growing segments of the PC space solely because the average Chromebook is cheaper than the average Windows PC.