Lenovo has pulled the plug on US sales of its 8 inch Windows tablets. While some retailers still have the Lenovo Miix 2 and ThinkPad 8 in stock, they’re no longer available from Lenovo.com.

The company tells PC World that it plans to continue selling the tablets in other markets where demand has been stronger — but that in the United States Windows tablets with larger screens have been more popular.

Update: Lenovo says while it’s sold out of small Windows tablets for now, the company plans to continue offering models of all sizes, including 8 and 10 inches, in the US and other countries. 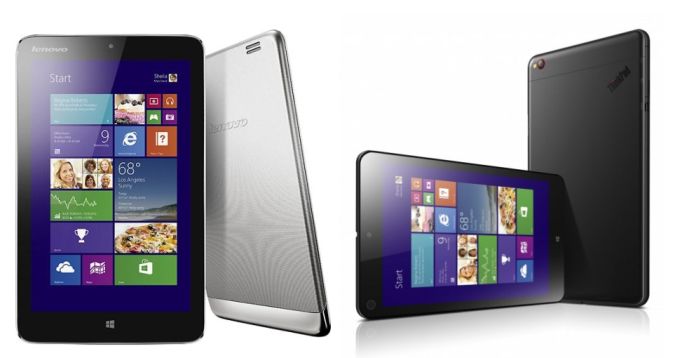 While some industry watchers think the market for larger screens overall shows more growth potential than small tablets, over the past few years tablets with small screens including the iPad mini, Amazon Kindle Fire and many Android tablets from Samsung, Asus, and others have been pretty popular.

So Microsoft has been making a push to get its software onto smaller tablets. The company offers Windows licenses free of charge to makers of tablets with 9 inch or smaller screens, and there are some reports that Microsoft may be giving Windows away to makers of all cheap tablets.

This year Toshiba and other device makers plan to launch Windows tablets that will sell for $200 or less, which makes them about half the price of the latest iPad mini models and competitively priced with Android tablets.

But Lenovo is the world’s largest PC maker… and if the company is pulling out of the small Windows tablet space in the US because of lack of demand, it probably means there’s lack of demand… or at least not enough demand for a big company like Lenovo to justify the expense of manufacturing and distributing the tablets here.

Toshiba, Asus, Dell, HP, and other makers of Windows tablets will have to make their own cost-benefit calculations. For now there’s no shortage of 8 inch Windows tablets on the market, and if you have your heart set on a Lenovo device you can opt for a small Android tablet or a larger Windows machine.

Or you can just pick up a cheap ThinkPad 8 or Miix 2 while they’re still available. Amazon is selling the Miix 2 8 for $202. TigerDirect has it for $220. And the Microsoft Store sells the ThinkPad 8 for $399.