The Raspberry Pi is a cheap, small, low-power single-board computer that can run Linux-based software and which developers and hobbyists have used to create home media centers, handheld game consoles, robots, and more.

But if the credit card-sized Raspberry Pi is too big for you, there’s a new game in town: The Hardkernel ODROID-W is a $30 computer module that’s small enough to fit in the palm of your hand. Since it has the same processor and connectors as the Raspberry Pi, it’s also compatible with any software developed for that system. 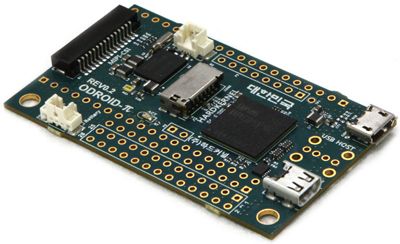 Like the Raspberry Pi, the ODROID-W features a Broadcom BCM2835 processor and 512MB of RAM. You can use a removable microSD card for storage.

There’s a microUSB port, a micro HDMI port, and a USB host connector for a full-sized port if you need one. There are also Raspberry Pi-like connectors including a 26-pin expansion header socket and a 15-pin Raspberry Pi camera cable connector.

One thin you won’t find is an Ethernet jack. You can add connectivity through USB peripherals, or you can pick up a $20 ODROID-W Docking Board which adds 4 USB ports, 10/100 Ethernet, an audio jack, and UART port.

So what could you do with a tiny computer/developer board like the ODROID-W? You could use it as a low-power desktop that runs Raspbian or another Raspberry Pi-friendly operating system. You could build your own smartwatch by adding a battery and display. Hardkernel has produced videos showing someone doing each of those things.

The ODROID-W is available for pre-order and should ship by the end of August.

6 replies on “Hardkernel ODROID-W is a tiny, Raspberry Pi-compatible PC”