Want to try out Google’s upcoming version of Android, but don’t have a Nexus 5 phone or Nexus 7 tablet? If you’ve got a slightly older Nexus 4 smartphone then you’re in luck — there’s an unofficial port of the Google Android L developer preview available for that phone.

At this point Android L for the Nexus 4 is based on the official Nexus 5 and Nexus 7 builds, it’s very much a work in progress, and there may be even more bugs than you’ll find in the officially supported versions.

But when have those things ever stopped people from flashing custom ROMs? 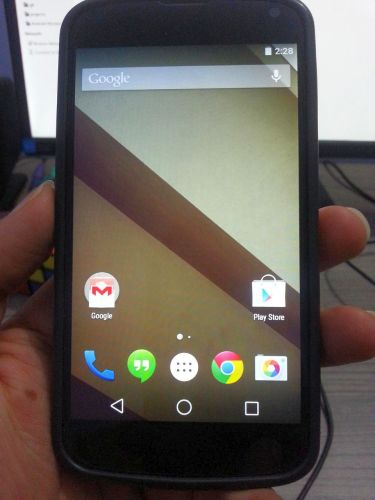 Members of the xda-developers forum figured out how to get Android L up and running on the Nexus 4 on July 5th, and developers have been trying to squash bugs at a furious pace.

Updates version 33 and later seem to be the most stable so far, with support for WiFi, 3G, camera, and other hardware are working, and you can load the Google Play Store and other apps.

Update: Developers are making some pretty serious progress: Bluetooth, NFC, and SuperUser are all working. If you’re looking for a ROM to flash, check out hte Android l preview thread at xda-developers for the latest beta.

Still, make sure to backup your phone before flashing this unofficial firmware. There’s a pretty good chance you’ll want to go back to KitKat or whatever ROM you’ve been running at some point.