As expected, BlackBerry’s newest and most unusual phone features a square screen. While most smartphones these days have aspect ratios you’re used to seeing on TVs and laptops like 16:9 or maybe 16:10, the BlackBerry Passport has a 1:1 display.

The handset features a 4.5 inch, 1440 x 1440 pixel touchscreen display with just as much viewing space as a 5 inch widescreen phone… but it’s shorter. Oh yeah, there’s also a tiny keyboard squashed below the screen.

The BlackBerry PassPort is scheduled to launch this fall. 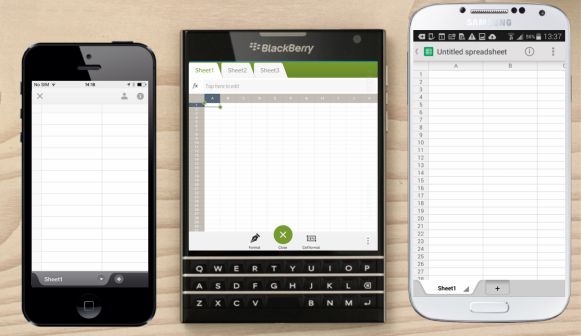 So why would you want a smartphone with a square screen? BlackBerry says the Passport has room for more characters of text on a screen and lets you view larger images.

Of course, most of those documents probably originated on a computer or a sheet of paper that wasn’t exactly square… but you know, whatever.

Ultimately it does look like there’s more viewing space on the BlackBerry Passport than on some competing devices — at least when the company shows the phone sitting side-by-side with an iPhone and a Samsung Galaxy smartphone. But in a world where most content is produced for widescreen devices, it remains to be seen how useful a phone with a 1:1 display will be.

The keyboard also looks funky — but if there’s one thing BlackBerry is known for, it’s producing phones with decent physical keyboards. So hopefully the designers knew what they were doing when they crammed a QWERTY keyboard into the tiny space below that big screen.

Blackberry hasn’t shared detailed specs for the phone yet, but it’s expected to feature 3GB of RAM, 32GB of storage, an SD card slot, and a 3450mAh battery.

4 replies on “BlackBerry is for squares (or meet the Passport: a phone with a square screen)”