Acer was one of the first companies to begin selling Chromebooks, and the company’s low-cost Acer C720 series of notebooks are among the most popular Chrome OS laptops. They regularly show up on Amazon’s list of best-selling laptops.

Now it looks like Acer is getting ready to launch its first desktop computer powered by Google’s Chrome operating system. 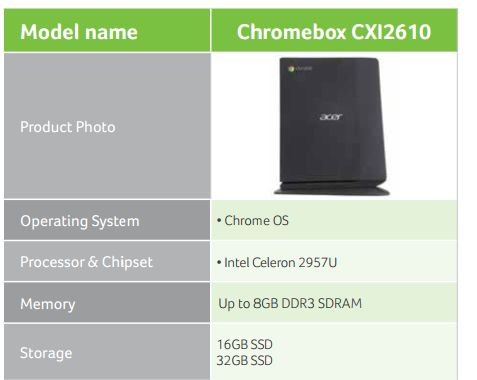 The Acer Chromebox CXI2610 features an Intel Celeron 2957U Haswell processor, 16GB to 32GB of solid state storage, and supports up to 8GB of RAM.

Acer hasn’t yet revealed the price or launch date for its first Chromebox, but details showed up in a brochure of the company’s 2014 business products. The same brochure also spilled the beans about the company’s upcoming Bay Trail and NVIDIA Tegra K1-powered Chromebooks.

Other companies that offer Chromebox desktops or all-in-one PCs include Asus, HP, and LG. Samsung was the first company to launch a Chromebox, but the company doesn’t currently offer a Chrome OS desktop.

7 replies on “Acer’s first Chromebox is on the way”