The Raspberry Pi Compute Module is a tiny PC that’s about the size of a laptop memory stick. It has the same basic guts as a Raspberry Pi single-board computer, including a 700 MHz Broadcom BCM2835 ARM11 processor and 512MB of RAM. But it also has 4GB of flash storage attached the the board.

Announced in April, the Compute Module is now available for purchase… as part of a development kit that sells for around $200 and up. 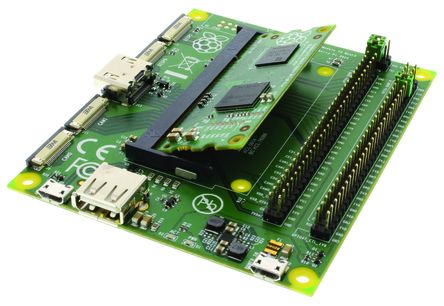 That makes this little system a lot more expensive than an ordinary $35 Raspberry Pi model B or $25 Model A. But while those systems are aimed at everyone, the Raspberry Pi Compute Module development kit is aimed at folks looking to design their own computer (or cameras, or other devices).

The Kit includes the Compute Module, an IO board with GPIO, USB, HDMI, and other connectors, a power supply, and camera adapter.

At launch the Raspberry Pi Compute Module supports Raspbian Linux, and the kit is available from Element14 and RS Components.