The Lenovo N20 is an 11.6 inch Chrome OS laptop that’ll sell for $279 and up when it goes on sale this summer (probably by August). Cheap, portable Chromebooks are a dime a dozen these days… but Lenovo’s got another trick up its sleeve.

The company will also launch the Lenovo N20p Chromebook with a touchscreen display that folds back 300 degrees for use in presentation or kiosk mode. It’ll be available by August for $329 and up. 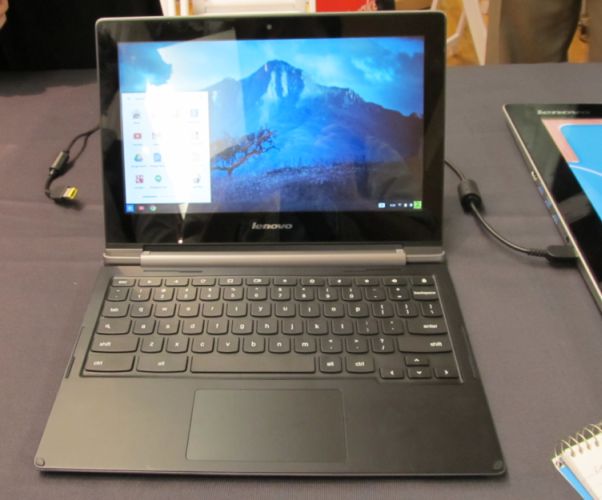 Lenovo also has a ThinkPad line of Chrome OS (and Windows) laptops with rugged cases and optional Yoga designs which allow you to push the screen back 360 degrees until the laptop becomes a tablet.

The N20 series notebooks aren’t as rugged or flexible, but they’re cheaper.

Lenovo introduced these laptops in May, and I recently got a chance to play with one for a few minutes. The notebook feels pretty light, looks pretty thin, and should get up to 8 hours of battery life, making it a decent choice for a portable notebook… as long as you don’t need a lot of storage space or the ability to run Windows apps.

The entry-level models will have just 2GB of RAM and 16GB of storage, and they run Google’s browser-based operating system. 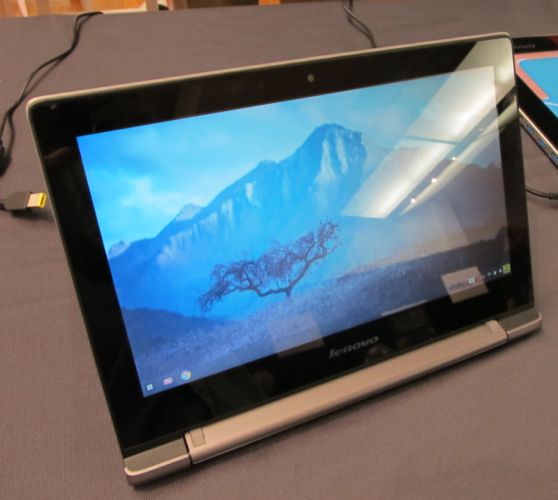 While Chrome OS is designed first and foremost for laptop and desktop computers, Google’s been making it more and more touch friendly over the past year or two, and I had no problem tapping the app launcher, minimize button, or other on-screen elements with my fingers.

Unfortunately the Lenovo N20p has limited viewing angles. While the 1366 x 768 pixel display looks decent when viewed from the front, from certain angles the colors wash out and disappear until it you’re practically staring at a black screen. That’s kind of disappointing for a laptop which has a screen that rotates to 300 degrees… although I suppose the wide range of rotation means it shouldn’t be hard to find an angle that works for you.

5 replies on “Hands-on with the Lenovo N20p touchscreen Chromebook”