The nabi DreamTab 8 is an Android tablet with an NVIDIA Tegra 4 quad-core processor, 2GB of RAM, an 8 inch full HD display, and a digital pen. But it’s not aimed at note-taking professionals: This tablet is designed for kids.

The DreamTab line of tablets are developed by kid-centric tablet makers Fuhu in partnership with DreamWorks Animation which is making its characters, animation, and other content part of the operating system.

You can pick up the 8 inch nabi DreamTab for about $269 from Walmart or Target . It should be available from additional retailers soon. 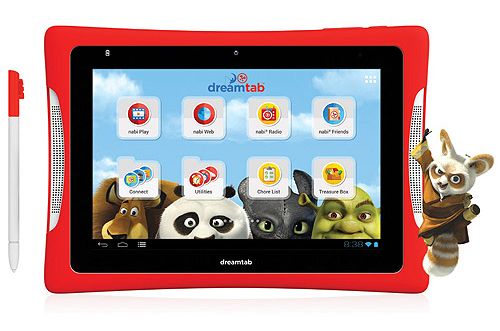 Fuhu started showing off the DreamTab 8 as well as a 12 inch model at CES in January.

While the tablet have the specs of pretty decent general-purpose Android tablets, they’re designed for kids and feature bumper cases, a kid-friendly operating system, and an emphasis on age-appropriate apps, games, educational software, and media.

The software includes the Dream Pro Studio which teaches drawing and animation using the Dream Pen (which is a pressure-sensitive pen from Wacom), nabi Konnect instant messaging, photo sharing, and email apps, and access to chidlren’s programming from the nabi Play and nabi Radio apps.

Like most Fuhu tablets, the DreamTab has a parent mode that lets you use the device as a regular Android tablet with the stock Google app launcher and other features.