More details about HP’s upcoming HP Slate 8 Plus Android tablet are emerging. We first spotted evidence of the unannounced 8 inch tablet in May, but details were scarce at the time.

Now Comparatif Tablette has found a spec sheet, suggesting it’ll be a more powerful device than the HP Slate 8 (which isn’t surprising, given that HP has put the word “plus” in the name). 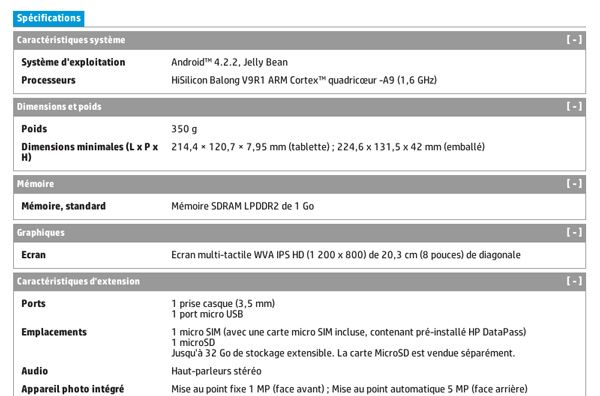 It has 1GB of RAM, 16GB of storage, 802.11n WiFi, Bluetooth 4.0, a microSD card slot, micro USB port, and in at least some regions it will be available with a micro SIM slot and cellular connectivity. The tablet has an 18.3Whr battery for up to 6 hours of run time and features a 5MP rear camera and 1MP front-facing camera.

A 3G model is expected to sell for about 299 Euros in France. There’s no word on how much a WiFi-only model will cost if or when the tablet goes on sale in the United States.