The Asus C200 Chromebook is a $249 laptop with an 11.6 inch display, an Intel Celeron Bay Trail processor, and around 10 hours of battery life. Oh yeah, it also happens to run Google’s browser-based operating system, Chrome OS.

Chrome OS is a fast, secure operating system designed to run web apps, keep your data synchronized across devices, and to let you run some apps and games even when you don’t have an internet connection. But sometimes you might want to do a little more… and you can.

All you have to do is enable developer mode: and that’s just about as easy to do on the Asus C200 as it has been on every other Chromebook or Chromebox released to date. Once developer mode is active, you can fire up a root shell, enable support for booting from USB, install Ubuntu or other operating systems, and do much more.

How to enable developer mode

Developer mode isn’t as secure as the normal Chrome OS environment, which is why it’s not enabled by default. But it takes about 10 minutes to enable developer mode, and for most of that time you don’t have to do anything but wait.

Note that the following process will wipe your data. While your bookmarks, apps, and other data are stored in the cloud, if you have any pictures, videos, or other documents stored on your Chromebook make sure to back them up.

Here’s how to enter developer mode on the Asus C200 Chromebook:

1. Press and hold the Esc and Refresh buttons and then tap the power button.

2. Your device will reboot and you’ll see a scary screen about not having an OS. Hit Ctrl+D when you see it.

4. The device will restart and you’ll see a notice that OS Verification is off. Hit Ctrl+D again to proceed.

5. After a 30-second countdown, the device will wipe your data and reboot into Chrome OS. The process takes about 6-7 minutes.

6. Once that’s done, just connect to your WiFi network and login with your username and password. That’s all there is to it!

Note that from now on when you boot your Chromebook, you’ll see the OS verification screen. You can wait for it to go away on its own or hit Ctrl+D to skip past it.

Ever want to exit dev mode and go back to regular mode? Just re-enable OS verification from the boot menu. This will wipe your data again, but the process is much quicker and you’ll be back to normal in no time.

Want to add a little Ubuntu to your Chrome OS laptop? You could install it manually… but I find it’s a lot easier to use a script called Crouton which loads Ubuntu in a chroot environment. 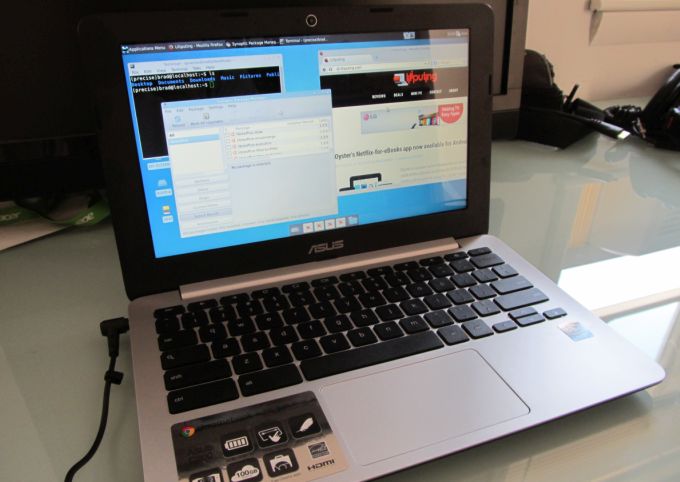 This means that Ubuntu will basically share resources with Chrome OS so that the WiFi, display, and other features should work out of the box with no modifications. It also lets you quickly switch between Chrome and Ubuntu — although I’ve found that the Asus C200 crashes if you try to switch from Ubuntu to Chrome and back again. The safest way to keep that from happening is to simply log out of Ubuntu when you’re done using it.

1. Download the latest version of the crouton script to your Chromebook.

2. Hit Ctrl+Alt+T and then type “shell” without quotes to enter a shell.

4. After a few minutes of watching text scroll by, the script will ask you to enter a username and password. Once you’ve done that, you’re good to go.

This will load the Ubuntu environment, allowing you to install apps including Firefox, GIMP, LibreOffice, and more.

As mentioned above, the safest way to exit Ubuntu without crashing your system is to log out. This will dump you back into the normal Chrome OS environment.

You can find more options at the crouton page at github, but here are a few ways to modify the command in step 3:

Then you can tweak the command from step 3. For example, here’s the command you would run to install Ubuntu 14.04 Trusty Tahr with the LXDE desktop environment:

Note that the -t list doesn’t just show you desktop environments, but also other targets that you can install, including the XBMC media player, support for Chromebook keyboard special keys, or even the Chrome web browser: so you can run Chrome from within Ubuntu… on a Chromebook. 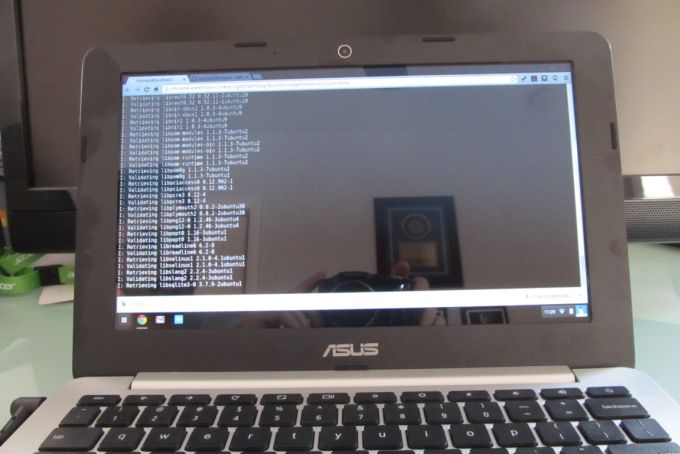 Want to replace Chrome OS with another operating system or partition the storage so that you can create a dual-boot setup?

You can enable legacy boot mode and the ability to boot from a USB drive. I’ve had limited success with this so far, but the steps should be similar to those outlined for the Asus Chromebox desktop at the Chromium website.