The Amazon Kindle DX is an eBook reader with a 9.7 inch E Ink display, physical buttons for turning pages, and a QWERTY keyboard below the screen. Amazon hasn’t updated the hardware for its biggest eReader since 2010, and back in April it looked like the company had discontinued the Kindle DX.

But last week we noticed that Amazon has the big screen eReader in stock again… and it’s stayed in stock ever since.

Better yet, the Kindle DX is cheaper than ever. It’s available from Amazon for $199… at least while supplies last. 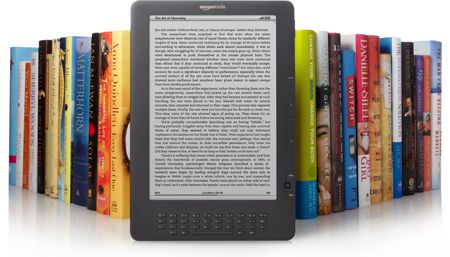 The Kindle DX features WiFi and 3G with support for AT&T’s 3G network in the US as well as some partner networks in other countries.

Unlike some recent Kindle devices, the Kindle DX has built-in stereo speakers and a 3.5mm stereo audio jack and supports text-to-speech.

It has 4GB of built-in storage, about 3.3GB of which you can use for files. Amazon says you can fit up to 3,500 books in that space.

While it’d be nice if Amazon updated the Kindle DX line, it’s nice to see that folks looking for something bigger than a 6 inch Kindle Paperwhite still have an option… especially one that costs just $10 more than a Kindle Paperwhite 3G with special offers (and $10 less than a model without ads on the home screen).

There’s no telling how long you’ll be able to pick up Kindle DX units from Amazon… the company stopped selling the eReader in late 2012 before bringing it back about a year later. And as mentioned above, it looked like it had been discontinued again in April, 2014. At this point, it’s not clear if Amazon is still actually manufacturing the Kindle DX or just clearing out remaining inventory.