Want to change the way the Android quick settings panel works, change the color of notifications on a per-app basis, add a “reboot” option to the power menu, customize the Google Experience launcher, or changed the behavior of your phone or tablet’s hardware buttons?

Once upon a time, you would have needed to replace the software that came with you device with a custom ROM. These days, you can find Xposed modules to do all of those things. Xposed is a framework that lets you change the behavior of your rooted Android device — and installing a module is just about as simple as downloading any Android app (assuming you’ve already gone through the process of rooting your phone or tablet).

Now the developer of the Xposed framework has launched version 2.6 of Xposed Installer, and it brings a new logo, a new user interface, and a few other improvements. 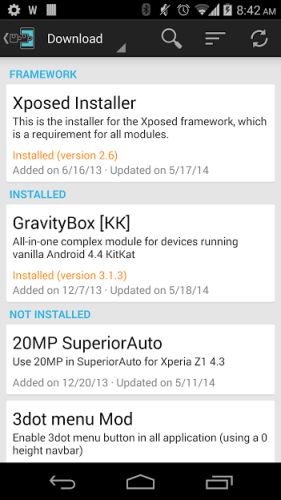 Xposed Installer is both a tool that lets you install the framework on rooted Android devices, and a sort of app store for Xposed modules such as GravityBox (which lets you tweak a ton of UI and performance features) and BootManager (which lets you prevent certain apps from running when you first boot your device).

As with any software involving root access to your device, you’re sort of taking things into your own hands if you use Xposed — don’t expect support from your phone maker or wireless carrier if you break something and can’t figure out how to fix it. But Xposed is a powerful took that could make custom ROMs pretty much unnecessary for many users. Thanks to Xposed and GravityBox, I haven’t felt the need to install a custom ROM on my Nexus 5 since the day I bought it.

So what’s new in version 2.6? The stark user interface of earlier models has been replaced with a new UI based on Google Now-inspired Cards. You can choose light, dark, or black themes… but no matter which color theme you use, it’s a bit easier to navigate through the list of available downloads in the new system which puts each item into a separate card.

There’s also a new app logo which looks like a piece fitting into a phone-shaped puzzle, the ability to sort the downloads by release type (with only stable software visible by default), and performance and compatibility improvements.

New to Xposed and looking for a few good modules to get started with? There’s a recent reddit thread for that.

One reply on “Xposed Framework for Android gets a makeover, still offers nearly unlimited customization”