Microsoft is updating  its app store for Windows 8.1 apps with improved navigation and discovery features in the hopes that the reasons you’re not downloading apps from the store is because you’re having trouble finding them… not because you don’t need them.

The new Windows Store includes new groups of categories called “collections,” a persistent navigation bar at the top of the screen, and featured apps on the home screen of the Windows Store. 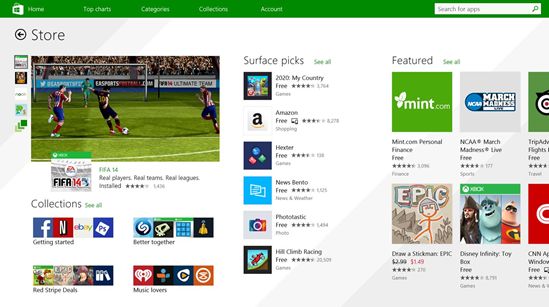 Meanwhile, if you keep an eye on the featured apps category, Microsoft plans to start highlighting apps that are on sale by showing a sale prices in red next to a strike-through of the original price.

Now that app developers have an option of making some apps and games available to both Windows and Windows Phone users, you’ll also start to notice an icon next to some apps in the store letting you know that you can pay once and download the apps on multiple devices including phones and PCs.

None of this addresses the fact that there are still a number of top tablet and touchscreen apps available for Android and iOS which are not yet available for Windows. But helping users find apps that can run on Windows tablets (and laptops or desktops) could help make the platform a little more attractive to some users.