As part of an effort to enable Windows software to run on inexpensive tablets with as little as 16GB of storage, Microsoft added a new feature to Windows 8.1 that allows installations to take up as little as 3GB of disk space — or less than half of what the software would usually require.

The feature is called WIMBoot, or Windows Image Boot, and basically it allows Windows to be installed with some core features hanging out in a compressed image instead of being unpacked on your device’s disk. It could mean that future Windows tablets with small amounts of storage will still have a reasonably large amount of free space for programs, media, and other files. But some users are already using WIMBoot to free up space on existing devices. 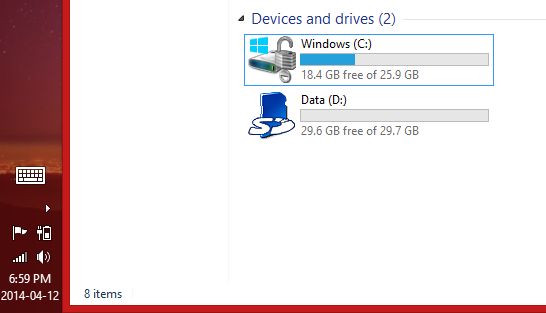 For instance, members of the Transformer Forums have been experimenting with using WIMBoot to reinstall Windows on the Asus Transformer Book T100 2-in-1 tablet. Asus offers a model that has just 32GB of storage, and WIMBoot allows users to gain a few gigabytes of usable disk space. You could also use WIMBoot on a 64GB model, but the more storage you have on your device the less important it probably is for you to free up disk space.

In a nutshell, the trick is to install Windows on a separate disk partition much the same way you would store a recovery image on the disk. In fact, since the image is read-only, it can actually serve as a recovery image, avoiding the need for a separate recovery partition. Then you configure the C drive to point to the disk image and use the files as needed.

You can find instructions for using WIMBoot to install Windows on an Asus Transformer Book T100 at Avisek.pl. You might be able to modify the instructions a bit to install the software on other devices, but you might want to do some more reading before getting started on that task.