The Vertu Constellation, for instance, sells for over $6,000. At that price, you’d expect a phone with top notch specs, but the Constellation’s hardware was already a bit dated when it launched in 2013.

Now it looks like a next-gen Vertu smartphone is on the way, and while the specs still aren’t exactly state-of-the-art, the upcoming Vertu Signature Touch does seem to have features that are at reasonably competitive. 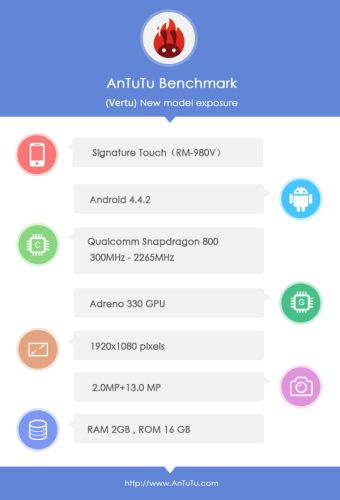 Specs for the unannounced phone showed up at online benchmark site AnTuTu recently, and paint a picture of a phone with a Qualcomm Snapdragon 800 quad-core processor, 2GB of RAM, 16GB of storage, a 1920 x 1080 pixel display, 13MP rear camera, and 2MP front-facing camera. The phone is running Android 4.4.2 KitKat software.

Those specs are pretty close to what you’d expect from a flagship smartphone… in 2013. For instance, the Samsung Galaxy S4 and HTC One (M7) both featured similar hardware, but in 2014 both Samsung and HTC have launched newer models with faster processors.

Still, if the specs (and phone) are real, the Vertu Signature Touch should be a reasonably powerful phone with a high resolution display. What the benchmarks don’t tells us is how much the company will charge for the phone or what kind of luxury features it will include to help justify the price, although if past is prologue, you can probably expect a subscription to “Vertu Life” invitation-only events and “Vertu Certainty” security features.