How do you type on a wearable product like Google Glass? Generally, you don’t. For the most part, Google expects you to use voice commands to control its wearable glasses and taps, swipes, and voice controls for smartwatches based on the new Android Wear platform.

But that hasn’t stopped the makers of the Minuum keyboard from figuring out how to bring a keyboard to Google Glass. 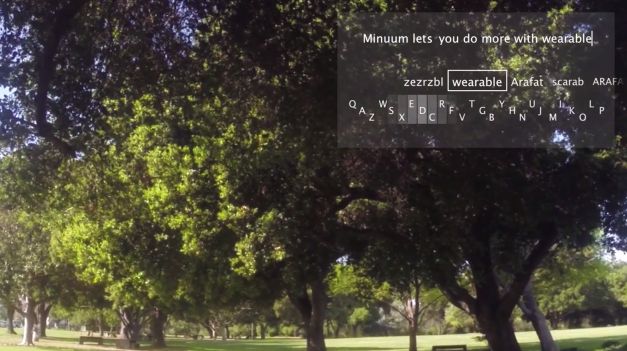 Minuum for Google Glass lets you enter text either by using the touch surface on the side of the device or by moving your head slightly.

The developers already offer a virtual keyboard app for Android phones and tablets, and they’ve shown off Minuum for other platforms such as smart TVs as well. Since Minuum is a single-line keyboard that relies on text prediction, it doesn’t require a ton of movement to enter text, which makes the idea of building Minuum keyboard for Google Glass not entirely crazy.

Using voice controls with Google glass still seems a bit simpler, but a virtual keyboard like Minuum could come in handy if you’re in a noisy environment… or if you just don’t want to be seen talking to yourself in public.

2 replies on “Typing on Glass: Minuum keyboard for Google Glass”