Toshiba is the latest company to take a page out of Lenovo’s book by introducing a notebook that has a display which folds back 360 degrees until it’s back-to-back with the keyboard for use in tablet mode.

What makes the Toshiba Satellite Radius unusual is its sheer size: This 360-degree “flip-and-fold” device has a 15.6 inch display. 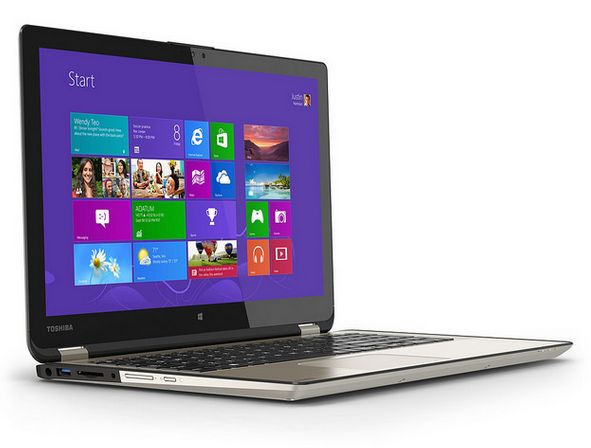 The good news is that the system is relatively compact for a notebook with a large screen. It measures 0.75 inches thick and weighs under 4.9 pounds. That makes it awfully heavy as a tablet, but not extraordinarily chunky for a notebook.

In addition to holding the Toshiba Satellite Radius on your lap while reading or gaming or putting it flat on a table to play digital board games, you can fold the screen to around 300 angles and use it in presentation mode for sharing content with others. You can also flip the whole thing over and prop it up like a tent for watching videos, reading recipes in the kitchen, or whatever else you’d do with an all-in-one, touchscreen computer.

Toshiba will begin selling the Radius in early July. It’ll be available from Toshiba.com and from Best Buy for $926 and up.

While Toshiba isn’t the first company to introduce a multi-mode computer with this bend-over-backward design, the Satellite Radius is one of the largest devices of its type so far. Lenovo, HP, and others offer models with 13.3 inch and smaller screens… although there’s evidence Asus also plans to introduced a 15.6 inch model soon.