The HP Chromebox is a tiny desktop computer designed to run Google’s Chrome operating system. But big things come in small packages, and HP plans to offer at least two versions of the device: one with an Intel Celeron 2955U processor and a more powerful system with an Intel Core i7-4600U chip.

HP hasn’t said much about its upcoming Chromebox line since revealing the product earlier this year. But new details have popped up on the company’s Canadian and Latin American websites in advance of the HP Chromebox’s launch in June. 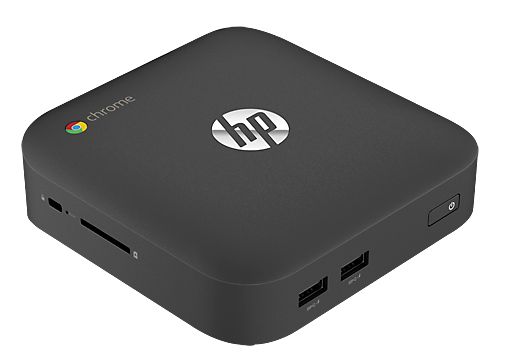 Here’s what to expect from the HP Chromebox:

The Core i7 model has two SODIMM slots, while there’s only one memory slot in the Celeron model.

The desktop measures about 5″ x 4.9″ x 1.5″ which puts it into the same class of computers as the Asus Chromebox, Intel NUC, and Gigabyte BRIX line of systems. All of these are full-fledged desktop computers that are small enough to easily hold in one hand… although you’ll need a keyboard, mouse, and monitor to really use this 1.39 pounds system.

If retail listings dug up by the folks at Mobile Geeks are anything to go by, it looks like the Celeron model will retail for around $200 while the Core i7 version (which is likely a “Chromebox for Meetings” system aimed at enterprise users) will sell for around $600 and up.

12 replies on “Say hello to the HP Chromebox”