NVIDIA is reportedly looking to expand its line of Shield handheld gaming systems with a new Shield Tablet. It’ll likely be powered by an NVIDIA Tegra K1 processor and feature support for streaming PC games over the internet using NVIDIA’s GameStream technology.

That means in addition to letting you play Android games, the handheld device will let you play PC titles including TitanFall and Batman: Arkham Origins. 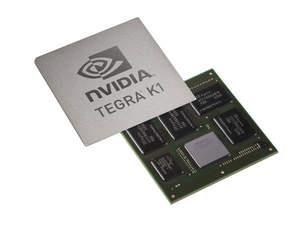 Now the folks at Fudzilla are reporting that the Mocha tablet could be an upcoming Shield tablet.

NVIDIA already offers a Shield handheld game system, but it’s not a tablet. It’s a device consisting of a video game controller attached to a 5 inch touchscreen display. It supports Android games as well as NVIDIA GameStream technology.

The company also offers a tablet design called the NVIDIA Tegra Note 7. It’s a small Android tablet with a Tegra 4 CPU, support for a special “DirectStylus” digital pen, and a $199 price tag. NVIDIA doesn’t sell the Tegra Note 7 itself, but instead partners with companies including EVGA and ZOTAC to sell it under their names.

But the Tegra Note 7 doesn’t support GameStream, which requires support for 5 GHz WiFi networks… something the tablet lacks.

Fudzilla reports the new Shield tablet will support 5 GHz WiFi, which should allow it to handle the faster WiFi networks required to stream games from a PC to a tablet with as little lag as possible.

It’s not entirely clear at this point if the Mocha tablet is the Shield tablet… but if it is, we can likely expect a speedy tablet with a high-resolution display, strong wireless performance, 2GB of RAM, and 16GB of storage, among other things.

It’s also possible NVIDIA’s gaming tablet will have a lower-resolution display though… the Shield handheld game console, for instance, has a 720p screen and the Tegra Note 7 has a 1280 x 800 pixel display. While NVIDIA’s chips can handle higher resolutions, keeping the pixel count relatively low can help provide long battery life and strong gaming graphics performance.

2 replies on “Report: NVIDIA Shield tablet with GameStream support on the way”