The OnePlus One is a premium phone with a mid-range price. Chinese startup OnePlus plans to begin selling the phone this month for $299 and up, offering one of the best deals you’ll find for a phone with a 5.5 inch full HD display, Qualcomm Snapdragon 801 processor, 3GB of RAM, and a 13MP camera.

At launch, the phone will be available in select markets, including the United States — so it’s not surprising that it passed through the FCC website recently, where you can find photos of the smartphone as well as pictures of its insides and the user manual that will ship with the OnePlus One. 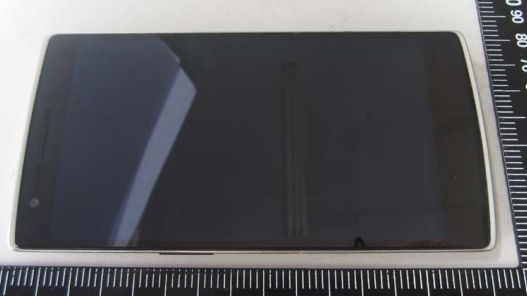 There aren’t really any surprises in the FCC documents, but they do confirm that phone’s specs including its support for 3G and 4G wireless networks. In the United States, customers will be able to use the OnePlus One on AT&T or T-Mobile’s 4G LTE networks.

The OnePlus One will ship with a custom version of Android designed by Cyanogen Inc, although there’s no mention of that fact in the user manual. The manual does confirm that the phone has a 3100mAh battery, Bluetooth 4.0, NFC, a 5MP front camera, and

Update: While the manual at the FCC suggests the phone will have a microSD card slot, the official spec sheet does not include one. It’s possible this user manual was created before the phone’s hardware was finalized.

While OnePlus has repeatedly said that the battery in this phone would not be user replaceable, the photos of the phone make it look like you should be able to pop out the battery if you open up the rear cover — but the user manual does suggest you only use batteries and other accessories provided by OnePlus in order to avoid damaging your device.

7 replies on “OnePlus One hits the FCC, complete with user manual, teardown photos”