The creators of the Novena open laptop have created a portable computer designed to run pretty much nothing but free and open source software. The designs for the hardware are also available.

But not everyone has the resources to laser cut their own case, order their own printed circuit board, and do all the other things necessary to turn hardware plans into a real device. So after creating a few Novena systems for their own use, Bunnie Huang and Sean Cross launched a crowdfunding campaign for folks that wanted to order their own pre-built Novena laptops.

The team recently surpassed their $250,000 goal which means the Novena laptop will go into production and the first systems should start shipping later this year and early next year. 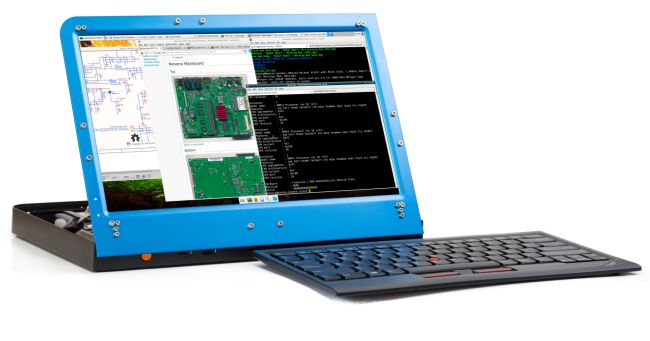 If all goes according to plan, backers who ordered a Novena system board will receive one in November. Folks who pledged more money for an all-in-one desktop (basically a less portable version of the Novena) should receive their packages in December. And laptops are slated to begin shipping in January, 2015.

The Novena is an unusual device developed by hackers and for hackers. It doesn’t come with a keyboard, since the developers figure users would rather supply their own. And it’s not exactly a laptop in the truest sense, since the screen opens away from the base and you need to set the keyboard out in front of the system… making it easy to get under the hood to make changes, but a bit tough to use the device on your lap.

The system is also expensive: the laptop costs nearly $2000, while the system board alone is going for $500. But that’s what happens when you custom design a device that’s meant to be produced in very small quantities and without support from major hardware or software companies.

While the processor is relatively slow compared with a modern x86 chip, it was chosen because it’s possible to use nothing but free and open source software to power the laptop… although at this point that software doesn’t include graphics drivers. But that could soon change. One of the stretch goals involves fine tuning reverse-engineered graphics drivers to enable support for hardware-accelerated graphics.

Update: And now that the first stretch goal has been met, the Novena team will work with developer Jon Nettleton to bring open source 3D graphics drivers to the Freescale i.MX6 chipset.