Motorola shook up the smartphone space a bit last year by introducing an entry-level smartphone with a low price tag and decent specs. The Moto G has an HD display, a relatively zippy processor, and a starting price of $179 for an unlocked phone.

Now Motorola is preparing to do it again… this time with an even cheaper model. The company’s expected to officially introduce the Moto E budget smartphone soon, but a series of leaks have provided pretty much all the details a bit early.

Update: It’s official. The Moto E is a $129 smartphone with decent features including a Gorilla Glass screen, Android 4.4 software, and a Snapdragon 200 CPU. 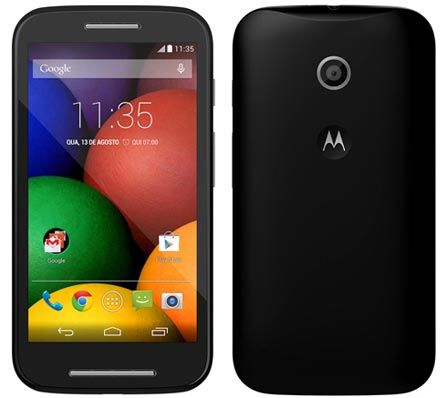 The Moto E features a 4.3 inch display, a 1.2 GHz Qualcomm Snapdragon dual-core processor, 1GB of RAM, and 4GB of storage. The phone also has a microSD card slot which you can use to add up to 32GB of extra storage space for media, files, and some app data.

The smartphone has a 1980mAh battery, a 5MP rear camera (but no front camera), and Android 4.4 KitKat and supports WiFi and 3G, but not 4G LTE.

It has dual SIM card slots, which would be a pretty good indication that this phone is destined for international markets where customers regularly use a single phone with more than one wireless network… the fact that most of this data came from a prematurely posted sales page at a Brazilian store would be another good indication.

via Phone Arena and Droid Life