Microsoft’s next Surface is a tablet with a 12 inch, 2160 x 1440 pixel display and up to an Intel Core i7 Haswell processor.

The Surface Pro 3 measures 0.36 inches thick and weighs 1.8 pounds, which means that while the screen is bigger than that of the Surface Pro 2, it’s thinner and lighter than its predecessor.

Microsoft says the Surface Pro 3 is 10 percent faster than the Surface Pro 2, has a higher-quality display with a 3:2 aspect ratio, and is a tablet designed to replace your notebook — so that you don’t need to choose between a tablet and a laptop when deciding which product to buy (you know, unless you care about being able to use your device in a single hand).

The system uses has a fan that the company says is silent, and it dissipates air through vents around the sides of the case. 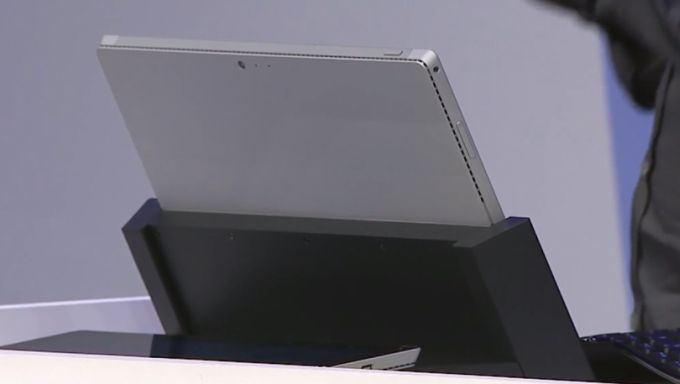 Wondering what kind of work you can get done on the Surface Pro 3? Adobe is introducing a next-gen version of Photoshop that’s optimized for finger and pen input for the Surface Pro 3, allowing you to use a stylus to edit your photos and your fingers to interact with the user interface, rotate photos, and perform other basic functions.

The Surface Pro 3 also has a redesigned kickstand which can be adjusted to more angles than the earlier models. It supports a 22 degree angle much like earlier Surface tablets, letting you prop up the screen as if it were a laptop display. But there’s also a canvas mode that lets you push the tablet down to a 150 degree angle for writing, drawing, or using the device propped up on a table. 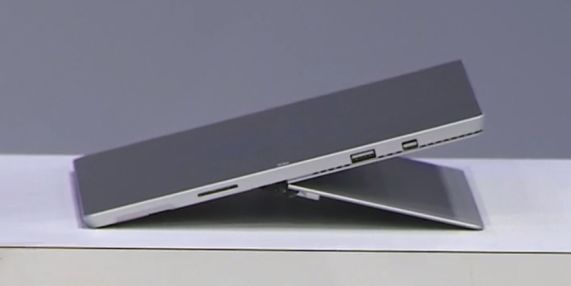 Microsoft CEO Satya Nadella also took advantage of the Surface Pro 3 launch event to point out that the company doesn’t want to compete with other hardware makers that offer Windows tablets. Instead, the goal of Microsoft’s hardware division is to introduce new categories of devices.

So while Microsoft has previously been expected to introduce a smaller “Surface Mini” tablet, a larger Surface Pro actually makes sense. There really isn’t anything else quite like this on the market — and if other device makers start offering laptop-replacement tablets with laptop-sized displays, I think Microsoft would be happy with that, since it’d help the company sell plenty of Windows licenses. 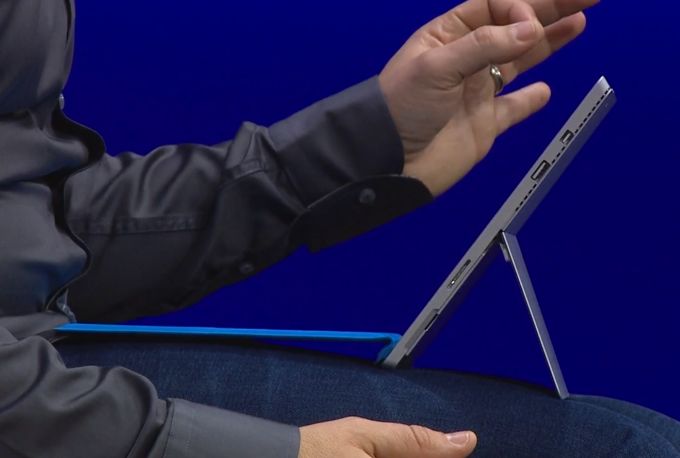 How can a tablet replace a laptop? With a good keyboard that lets you actually use the system on your lap… but rather than taking an Asus Transformer Book 2-in-1 style approach with a laptop-style keyboard that clicks into the tablet, Microsoft redesigned its Type Cover for the Surface Pro 3.

It has a magnetic locking mechanism that latches onto the tablet, allowing you to prop up the tablet using the kickstand, while you position the keyboard in front of the tablet so you can type. Microsoft says it feels a sturdy as a laptop when you actually use it on your lap. 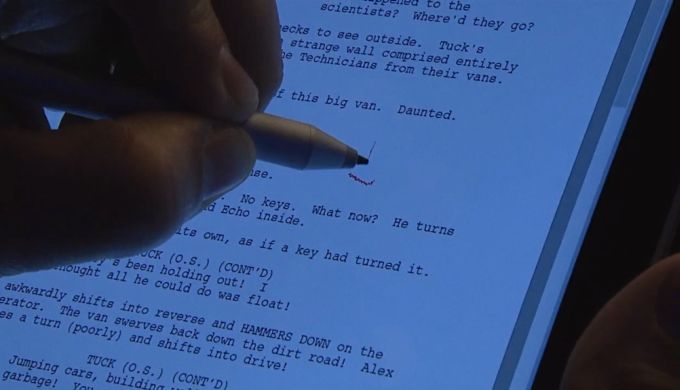 Microsoft is also emphasizing tablet use. The 3:2 aspect ratio makes it easier to treat the tablet like a piece of paper than Windows tablets with wide-screen, 16:9 pixel displays.

The company has includes a digital pen and palm blocking software that lets you place your palm on the tablet like you would with a piece of paper without worrying about your palm moving a cursor or making marks on the screen.

The pen support 256 points of pressure and Microsoft says there’s nearly no latency or parallax effects… which means when you’re writing, it feels like there’s no distance between the tip of the pen and the marks that you’re drawing, and there should be nearly no delay.

Interestingly, Microsoft has replaced the Wacom digitizer used in earlier models with an N-Trig digitizer.

The Surface Pro 3 pen also has another feature — even when your tablet’s screen is turned off, you can click the pen to wake up the tablet and launch OneNote so you can start writing notes right away, without even unlocking the tablet. You can also click the pen again when you’re done to save your devices to Microsoft’s OneDrive cloud storage so it’ll be synchronized to your phone, desktop, or other devices.

You can also snap a photo with the tablet’s camera and use the pen to annotate it with pictures or text.