Microsoft’s new Surface Pro 3 is a bigger, faster, thinner Surface tablet, and Microsoft thinks its the first model that might have a real shot at replacing your notebook.

The company introduced the tablet at an event in New York this morning, and it goes up for pre-order May 21st, 2014 for $799 and up.

Want to know what’s under the hood of the latest Surface tablet? Read on for all the details. 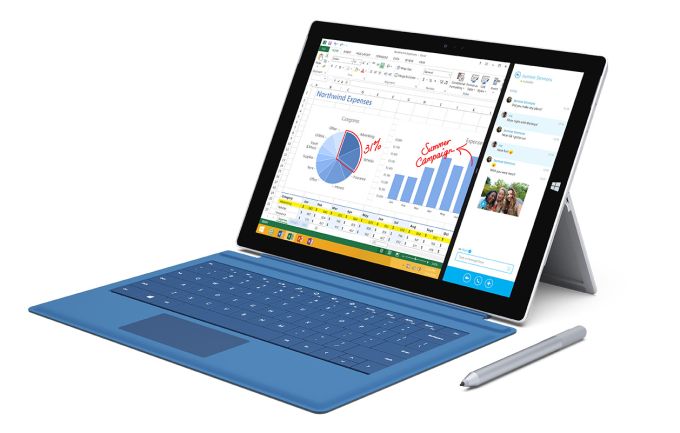 The Surface Pro 3 measures 11.5″ x 7.9″ x 0.36″ and weighs 1.76 pounds. It has a 3:2 aspect ratio display, making it a bit easier to hold in one hand than earlier Surface tablets, even though it has a bigger screen. The tablet has a magnesium case and a new type of fan that Microsoft says is 30 percent more efficient than earlier models, which is why the Surface Pro 3 is actually thinner than its predecessor.

The company will offer models with up to a Core i7 processor and up to 512GB of storage, although clearly the cheapest models will pack a lot less power and storage.

The $799 model will feature a Core i3 Haswell CPU, 4GB of RAM and 64GB of storage. Other models include:

Accessories include a Type Cover which protects the screen and functions as a keyboard, a Docking Station which adds support for 4K video output, among other things, and an Ethernet adapter. Here are the estimated prices:

The tablet also has a new multi-position kickstand which can be used to prop up the Surface Pro 3 for laptop-style use, for watching videos, or for lying at a slight angle on a table for writing or drawing in “canvas” mode.