LG recently unveiled plans to launch new Android tablets with 7, 8, and 10 inch displays. If you’re wondering why the company needs that middle model when it already sells an 8.3 inch tablet called the LG G Pad 8.3, there are signs that the new models will be aimed at bargain-hunting tablet customers.

While the LG G Pad 8.3 has premium specs including a Qualcomm Snapdragon 600 CPU, a full HD display, and 2GB of RAM, leaked benchmark results suggest the new tablets will have less impressive features… and hopefully a correspondingly lower price.

LG’s new 7 and 10 inch models passed through the FCC in April, so we have a pretty good idea that they’ll have the model numbers LG-V400 and LG-V700, respectively.

The LG-V400 showed up in AnTuTu benchmarks recently, and the makers of the benchmark report it features a Qualcomm Snapdragon 400 quad-core processor with Adreno 305 graphics, a 1280 x 800 pixel display, 1GB of RAM, and 8GB of storage.

Those are decent specs for a low-cost tablet, but folks looking for bleeding edge performance would probably be better off opting for last year’s G Pad 8.3. That tablet tends to sell for $279 and up

What’s not yet clear is whether the company’s new 8 and 10 inch tablets will feature the same entry-level hardware. 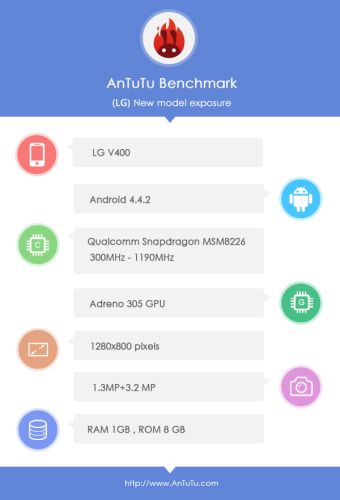 via The Droid Guy