Just like last year’s HTC One mini, the new HTC One mini 2 looks like the company’s latest high-end device. But it has a smaller screen, a lower display resolution, a slower processor, less memory, and other cut-down features.

The good news is that means it’ll also likely have a smaller price tag. 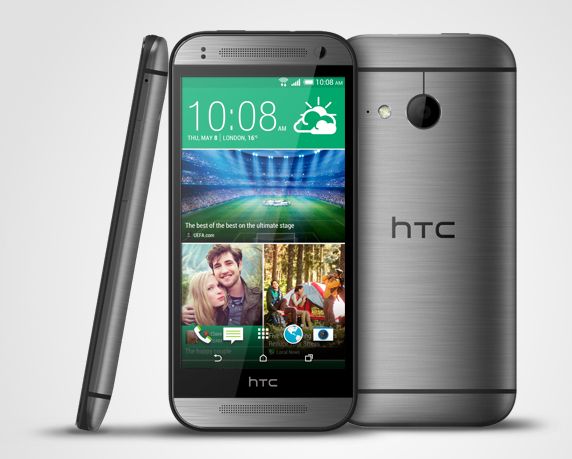 The HTC One mini 2 features the same design as the HTC One (M8), including front-facing stereo speakers and a choice of colors including gray, silver, and gold. But it lacks the depth-sensing dual-lens camera, full HD display, and Qualcomm Snapdragon 801 processor of its 5 inch sibling.

Instead, the HTC One mini 2 features:

On the bright side, HTC is playing up features including the 5MP front-facing camera with a BSI sensor for snapping “high-quality selfies,” if that’s not an oxymoron. There’s also a 13MP rear camera (instead of the 4MP “Ultrapixel” camera on the HTC One (M8) and the stereo front-facing speakers have the same amplifier as those in HTC’s larger phone.

The HTC One mini 2 is scheduled to launch in Europe, Asia, the Middle East, and Africa starting in June.

It’s a little funny that in 2014 companies can call a phone with a 4.5 inch display a “mini.” There was a time when phones with similarly-sized phones were considered enormous: and that time was just a few years ago.

2 replies on “HTC One mini 2 is a smaller, cheaper, slower HTC One”