Since Google launched its Chrome web browser, the developers have offered something called an Omnibox: a single bar at the top of the screen that you can use to search the web or enter a URL. But it looks like Google may be changing the behavior of that box.

Chrome 36 Canary is an early build of the next version of Google’s web browser, and it has a flag called “Enable origin chip in the Omnibox.” When enabled, you won’t see the full URL of the website you’re visiting anymore.

Instead you’ll just see the main domain… and it’ll be located next to the Omnibox instead of inside it. So you’ll see something like “Liliputing.com” and a box next to it that you can use to search Google or type a new URL.

Update: It looks like the “origin chip” feature has been put on the back burner… and may never go live for all users. 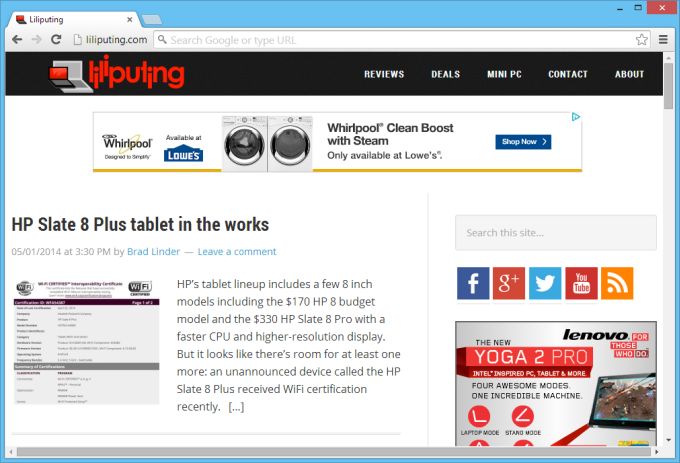 You can still get the full URL of a website by clicking on the “Origin Chip” button with the domain name. It’ll populate the Omnibox with the full URL. So if you want to know if you’re at reddit.com/r/android or reddit.com/r/nsfw, you can just click the button to find out (or you know, look at the content on the website… it should be pretty clear).

The move could be an attempt to make URLs a bit easier to understand… much the same way as the recent push to hide the “https” field in modern web browsers. But folks who treat the URL bar as a breadcrumb system, helping them discovered when they’re on /page/2 of a site, for instance, might find the brave new world a bit tougher to navigate.

It’s not clear if Google actually plans to roll out the new Origin Chip feature to everyone anytime soon… or ever. The flag is turned off by default in Chrome 36 Canary, and Google has a habit of using Canary builds to test experimental features that might never actually see the light of day.

Google’s actually been experimenting with the Origin Chip feature for months. It first showed up in December, 2013. 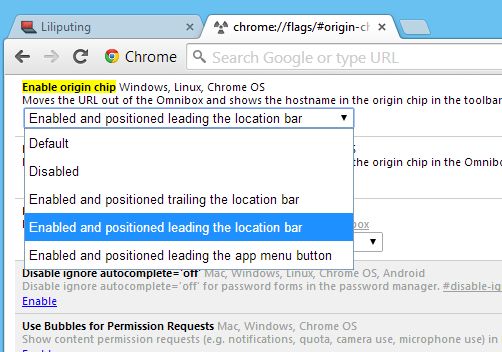 You can give the feature a try by installing the latest Chrome Canary build (you can install it alongside any existing versions of Chrome you’re already running) and typing “chrome://flags/#origin-chip” into the URL bar, without the quotes. Then choose the position where you’d like the Origin Chip to appear and relaunch the browser.

via Allen Pike and /r/Chrome