The HP SlateBook 14 is an upcoming notebook with a 14 inch screen, an NVDIA Tegra processor, and Android software. HP hasn’t officially launched the notebook yet, but a promotional video spilled the beans when it popped up on the company website last month. It’s since been removed.

But now a handful of stores are starting to post product pages for the HP SlateBook 14, and they could give us an idea of what to expect from HP’s first Android laptop when it launches. 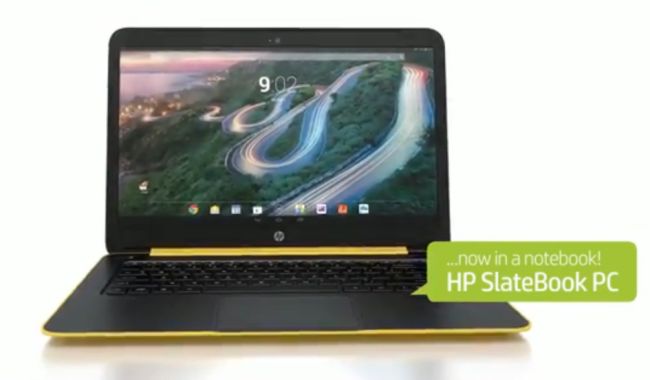 The notebook reportedly has a 14 inch full HD display, 2GB of RAM, and 16GB of storage. We already knew that from the video. What we didn’t know is exactly which NVIDIA Tegra chip the laptop would feature — if these retail listings are correct, it looks like the SlateBook 14 is packing an NVIDIA Tegra 4 chip.

That’s NVIDIA’s quad-core, ARM Cortex-A15 processor from 2013. If you were hoping for NVIDIA’s new Tegra K1 chip with 192-core “Kepler” graphics, it looks like you might have to wait for another laptop.

Other features reportedly include a 32Whr battery, 802.11b/g/n WiFi, Bluetooth, an HD webcam, and Android 4.3 Jelly Bean software. The notebook features Beats Audio and has a touchscreen display.

ValleySeek is showing a price of $422 for the laptop, while Spectrum SuperStore , ZAX, and BuilderDepot have price tags of $542. I’d take both prices with a very big grain of salt. Remember, HP hasn’t even announced this laptop yet and it’s certainly not available for purchase. These prices might just be place holders.