Sony has announced a new research project that could change the way people learn to use a new phone. It’s called EvolutionUI, and as the name suggests, it’s meant to evolve over time.

When you first get a new smartphone, for instance, you might not want to delve into all of the complicated settings and options in order to make your first call. So EvolutionUI hides some advanced settings until you’re ready for them. 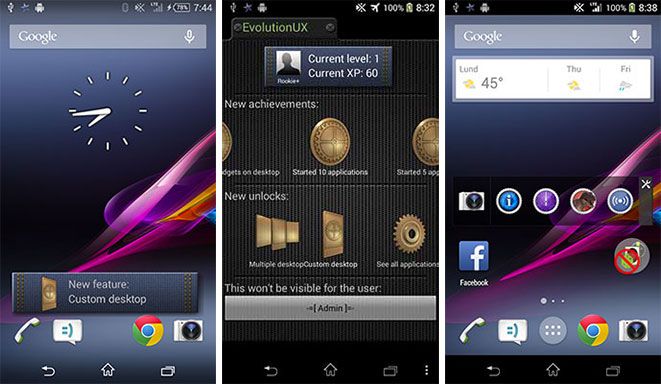 How does the software know when you’re ready? You’ll tell it… but not explicitly. Instead, the more you use your device, the more likely you are to unlock new features. Think of it like a game: you learn how to play as you go along, and the further you get, the more features you unlock.

For example, the first time you fire up an Android device with EvolutionUI, you’ll see just one home screen, just 4 apps on the screen, and everything’s locked into place so you won’t accidentally move things around. As you use your device, more features will appear including the ability to add shortcuts to your desktop, add more virtual desktops, or make other changes.

You’ll get access to the new features by unlocking “achievements,” just like you would in a game. You could even track your achievements using an app that shows your trophies.

The idea’s interesting… but it seems like the sort of thing you’d probably only need on your first Android phone. Once you’ve used one, it’s not usually too hard to figure out how to use another (even if it uses TouchWiz or a different custom user interface).

Sony is calling EvolutionUI a research project and there’s no guarantee it’ll ever grow up and become a real feature of future phones.

6 replies on “Sony introduces EvolutionUI: A smartphone UI that changes over time”