Lenovo is getting ready to launch a business-friendly 10 inch Windows tablet with an Intel Bay Trail processor. Details about the unannounced Lenovo ThinkPad 10 have been popping up since early April, but now Lenovo is sharing pretty much all the details you could want (except for the price).

Photos and specs have been posted on the Lenovo Australia website. 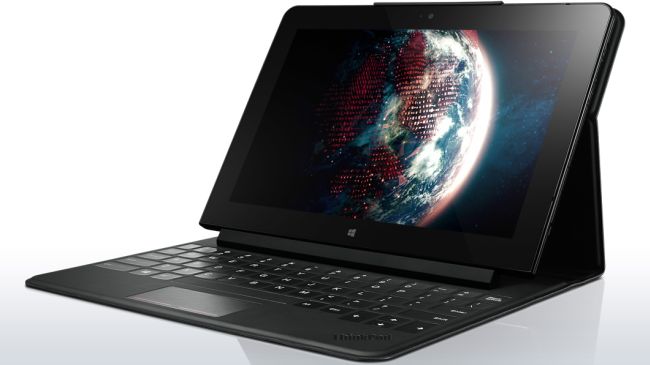 Lenovo will offer models with 2GB or 4GB of RAM and 64GB or 128GB of storage. At launch only the 2GB/64GB model will be available, but the higher-capacity options are listed as “coming soon.”

At launch the tablet will also only be available with Windows 8.1 32-bit, but later you’ll be able to get a model with Windows 8.1 64-bit or Windows 8.1 Pro 64-bit. The Pro version will not come with Microsoft Office Home & Student 2013 pre-loaded, but the other models will.

Each model is expected to have an 8MP rear camera and 2MP front-facing camera, stereo speakers, a mic, 802.11n WiFi, and Bluetooth 4.0. The ThinkPad 10 has a 33Whr battery good for up to 10 hours of use. The tablet has an active digitizer and support for an optional digital pen and features a mini HDMI port and WiFi Direct printing support.

Lenovo will also offer a model with support for 4G LTE, EVDO, and HSPA+ cellular networks. That model will also include a fingerprint reader and NFC capabilities.

The company will also offer a Quickshot Cover like the one available for the smaller ThinkPad 8 tablet. It’s a tablet cover with a flap near the rear camera that lets you fold down the edge of the cover to reveal the lens and immediately launch the camera app to snap a quick photo.

Other accessories include a tablet dock with 3 USB 3.0 ports, an HDMI port, Ethernet jack, PXE boot support, and audio jacks and a Ultrabook Keyboard accessory with mechanical keys and a slot for the digitizer pen.