Google’s Project Tango is an effort to build a smartphone that can create a 3D map of the world around it so that you can use mobile apps to interact with physical objects. For example you could use apps to choose paint colors for your house or conduct other interior decorating projects. Or you could play video games that involve real-world objects.

Project Tango is still in the prototype phase, but the folks at repair workshop got their hands on an early unit and they’ve ripped it apart to see what’s inside. While it’s not quite as repair-friendly as the new Google Project Ara modular phone, it earns high marks from the iFixit team… which makes sense for a developer prototype. 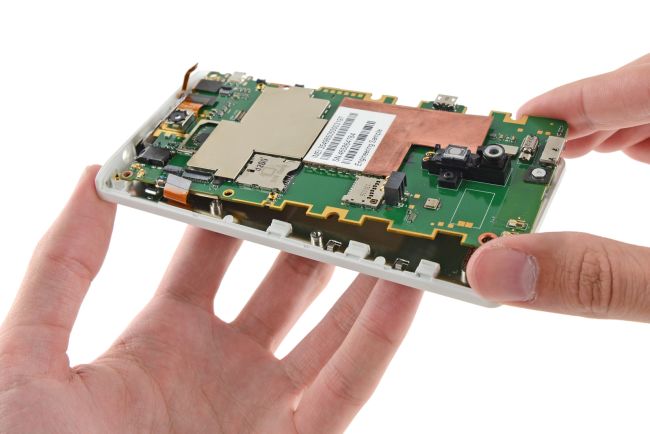 Under the hood, the prototype has a Qualcomm Snapdragon 800 quad-core processor, 64GB of storage, 2GB of RAM, and a range of sensors including an accelerometer, gyroscope, and compass.

The device also features an infrared projector which assists in depth-perception, and helps the phone make 250 thousand measurements per second to create a 3D model of your location.

The prototype has a 5 inch screen, a 3000mAh battery, and a rather chunky case — but right now we’re looking at a Project Tango prototype. By the time this technology makes it into actual phones, tablets, cameras, or other devices the whole package could be more svelte.

You can find more details at the Project Tango website, and more teardown photos at iFixit.