Now Dropbox is adding a few new tools to its lineup, including Carousel for Android and iOS. It’s a gallery app that lets you organize the photos and videos in your personal cloud from your mobile device. 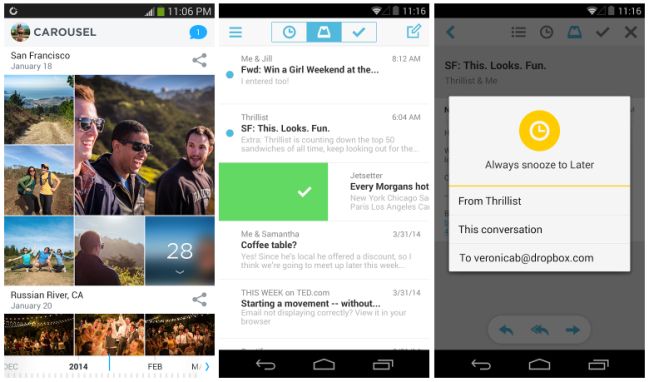 Mailbox is a mobile inbox app designed to work with Gmail and iCloud accounts. It’s got an attractive, mobile-focused theme, support for gesture-based navigation, and a few nifty features like the ability to “snooze” a message so that it goes away for a while and comes back to your inbox later when you (might) have more time to deal with it.

Dropbox acquired the team that made Mailbox last year, and in addition to launching an Android version, the team has also introduced a new Auto-swipe feature that learns from your swipe and snooze behavior and automatically guesses the actions you’re likely to take in order to help you manage your messages.

The new Carousel app is basically the Dropbox answer to the built-in photo and video management features in Android and iOS. Instead of automatically backing up your photos to Google+ or iCloud, you can use the Carousel app to backup photos to Dropbox as you take them.

Carousel automatically sorts uploads to simplify navigation, and lets you share content with other users quickly by swiping up or hide photos or videos by swiping down.