Google’s Chrome web browser continues to blur the lines between web apps and desktop apps. The latest dev channel version of Chrome lets you control some web apps using keyboard shortcuts — even when the web browser isn’t in focus. 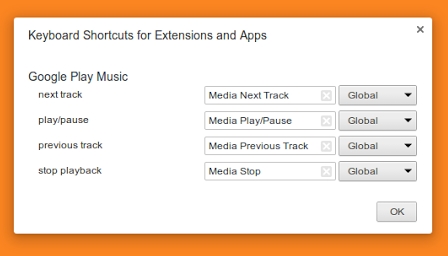 In other words, you can load up the Google Play Music Mini Player or another supported app to start streaming music and then minimize the video while you go and do something else with your PC. But you can still skip tracks, pause, play, or issue other commands without maximizing that window again.

The new feature will only work with web apps that support it… and with supported versions of the browser. But it helps web apps such as Google Play Music feel a bit more like desktop apps such like Windows Media Player.

As of early April, 2014 you need a dev channel version of Chrome with support for “global scope” extensions to use keyboard shortcuts this way. Eventually the feature should make its way into beta and then stable versions of Chrome.