Acer is expanding its line of 7 inch Android tablet with two new models, the Intel-powered Iconia One 7 and the ARM-based Iconia Tab 7.

Both are basically low-cost tablets, but Acer is positioning the Iconia One 7 as a fashionable device that comes in a variety of colors while the Iconia Tab 7 has a sturdier aluminum chassis and integrated 3G for cellular data and phone calls.

The tablet has a 1280 x 800 pixel display, up to 7 hours of battery life, and it currently runs Android 4.2 Jelly Bean — although Acer plans to offer an upgrade to Android 4.4 KitKat. It features 1GB of RAM, and either 8GB or 16GB of storage.

Acer plans to offer the tablet in June for prices around $130 and up.

This tablet has a MediaTek MT8382 quad-core processor, supports phone calls over 3G networks (you can use a Bluetooth headset if you don’t want to hold a tablet to your head), and features front and rear cameras. 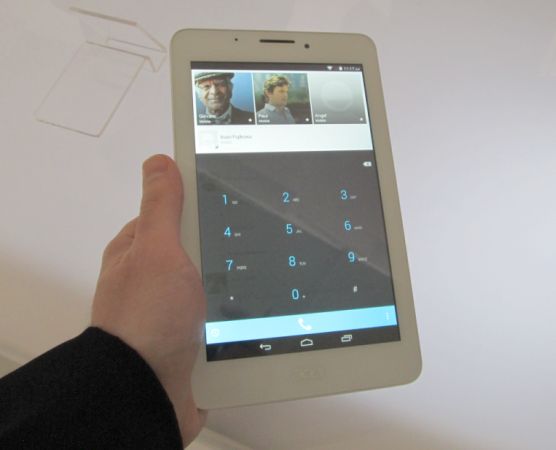 Acer plans to offer two screen options for the Iconia Tab 7: It will be available with a 1024 x 600 pixel screen or a 1280 x 800 pixel IPS display. It will be available in 8GB and 16GB versions and both models will have 1GB of RAM and run for up to 6 hours on a charge.

Both should be available in select markets starting at the end of June. And when I say select markets, I mean Latin America, the Middle East, Europe and Africa. Prices are expected to run around $145 to $200 in those markets.

The company hasn’t unveiled any US availability for this model.

A number of unannounced Acer tablets have also popped up in online benchmarks and regulatory listings recently… but so far Acer hasn’t officially announced any of those 8.9 inch tablets.