Acer appears to be testing a new 8 inch Android tablet with an Intel Atom Bay Trail processor. Specs and test results for the unannounced Acer A1-840 showed up at the GFXBench website recently, and they paint a picture of a low-cost tablet powered by Intel. 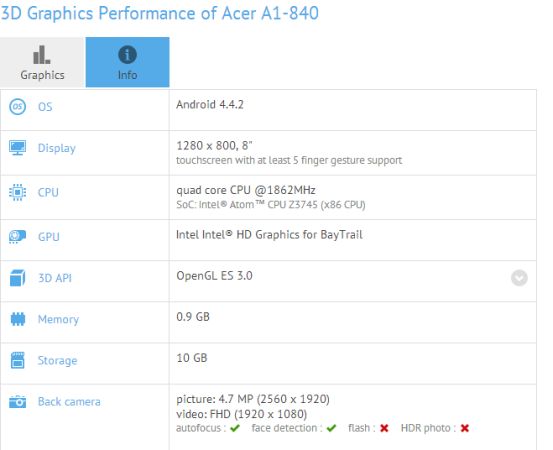 While there’s no word on the price or launch date, here’s what the benchmark site tells us about Acer’s new tablet.

The tablet appears to feature 1GB of RAM, a 5MP rear camera, and 2MP front-facing camera, and runs Android 4.4 KitKat software. According to GFXBench it has 10GB of storage, but I suspect that means the tablet actually has 16GB of storage, about 10GB of which is available to the user.

The Acer A1-840 also features WiFi, Bluetooth, and GPS, but no NFC.

While the Acer A1-840 isn’t the first 8 inch tablet from Acer, it’ll be one of the first to feature an Intel Atom Bay Trail processor… and it could be one of the first Bay Trail Android tablets from any company — although Taiwanese OEM ECS is also working on a similar device with an Atom Z3735E processor. Several Chinese device makers also plan to launch Bay Trail tablets soon.