The next version of the Unity game engine is up for pre-order, and it will be available for game developers this year. The platform brings support for advance graphics, a new audio architecture, and a new WebGL add-on that will allow users to play games in a web browser without installing any plugins.

Games developed for Unity 5 with the WebGL add-on will run in the desktop versions of Firefox and Chrome at launch, but could eventually support any browser that supports WebGL. 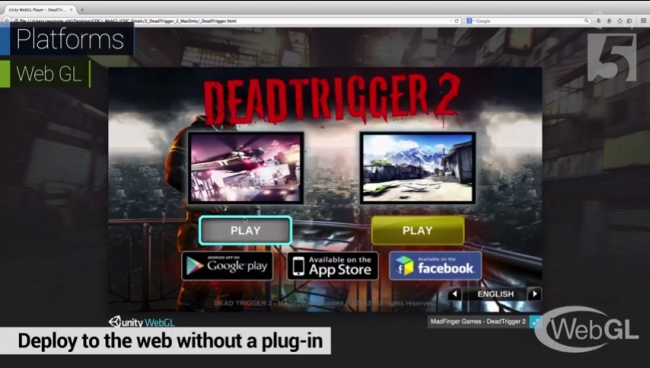 Unity has been working with Mozilla to support the asm.js JavaScript technology included in Firefox, so the best performance will initially be available in the Firefox web browser.

The Unity game engine won’t be the only option for plugin-free browser-based 3D gaming though. Mozilla is also working with Epic Games to bring Unreal Engine to the browser.

But while we’ve only seen a tech demo of Unreal Engine working in Firefox, Mozilla is already showing off Dead Trigger 2 running at full speed in a web browser.

The Unity game engine allows developers to create games that can run on a range of platforms including Windows, OS X, Linux, Xbox, PlayStation, Android and iOS and the web. Up until now the web component has required a Unity plugin, but when Unity 5 launches it’ll come with a WebGEL early access add-on for developers that want to offer a plugin-free experience.