The era of laptops with 1366 x 768 pixel displays may not be over just yet, but over the past few years a growing number of PC makers have started offering models with 1080p or higher resolution displays.

One of Toshiba’s latest laptops goes way higher. The Toshiba Satellite P50t features a 15.6 inch, 3840 x 2160 pixel display, also known as Ultra HD (and occasionally 4K, although there’s some dispute over exactly what counts as 4K). 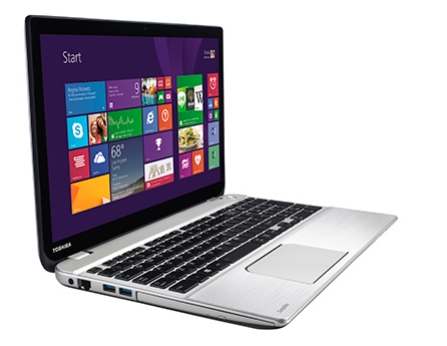 The laptop has 282 pixels per inch, giving it sharper image clarity than you’ll find on many phones or tablets. It features an Intel Core i7 Haswell processor and AMD Radeon R9 M265X graphics with 2GB of VRAM to keep pumping out graphics to all of those pixels.

With a 15.6 inch screen, the Toshiba Satellite P50t is a bit large compared to the ultraportable notebooks we usually cover at Liliputing, but it’s reasonably compact at less than 4.9 pounds and about 1.1 inches thick.

That makes it a bit too thick to count as an ultrabook, and the notebook also lacks the requisite solid state drive. But it has premium specs including a 1TB hard drvie, up to 16GB of RAM, and Harman Kardon speakers.

Toshiba isn’t the only company working on a 15 inch notebook with a 4K Ultra HD display. Asus is also apparently working on a Zenbook NX500 laptop with an aluminum case and Bang & Olufsen audio.

Samsung, Lenovo, and others also offer a number of laptops with only slightly less impressive 3200 x 1800 pixel displays.